Ca2+ has proven to be a universal signaling molecule in excitable and nonexcitable cells. However, being that its intracellular concentration is 1000 times lower than the extracellular milieu, it is important for the cell to keep this ratio for proper function. NCX, a Na+/Ca2+ exchanger is responsible for most of the efflux of Ca2+ from the cell1-3. The NCX transporter is a member of the SLC8 family of solute carriers which in turn belong to the CaCA superfamily1,4,5.

NCX-1 is one of three Na+/Ca2+ exchangers (NCX-1, NCX-2, NCX-3) leading to one Ca2+ movement across the plasma membrane in exchange of three Na+ influx. However, the transporter can reverse the direction of the transport if the concentrations of Na+ and Ca2+ change6. The transporter has nine transmembrane domains and intracellular N- and C-terminals. Between tansmembrane domains 5 and 6, the presence of an extra-long intracellular loop, termed the f loop, is responsible for regulating the activity of NCX-1 via several different mechanisms like ion binding, phosphorylation, etc. The f loop also has sites which undergo alternative splicing7.

Of the three NCX expressed in mammalian cells, NCX-1 is the most widely expressed. Its expression is detected in the heart, brain, and kidney. NCX- 1 undergoes alternative splicing in a tissue dependent manner. The first splice region does not change the overall structure of the protein but rather enables the expression of the gene specific to the tissues which require the expression of the gene. The second splicing site leads to a number of proteins varying in length. NCX-2 expression is much more limited; it is expressed only in neurons. NCX-3 is expressed in skeletal muscle and in some regions of the brain and undergoes alternative splicing in a similar fashion to that of NCX-11,8.

Due to their central role in modulating Ca2+ levels in the cell, NCX exchangers are involved in various pathophysiological diseases/disorders such as hypoxia, aging, Alzheimer’s disease7, to name a few. 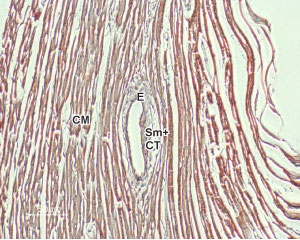 Expression of NCX-1 in rat heartImmunohistochemical staining of rat heart paraffin-embedded sections using Anti-NCX1 (SLC8A1) Antibody (#ANX-011), (1:100). Hematoxilin is used as the counterstain. NCX-1 labeling (brown) appears in the cardiac muscle cells (CM), and not in other parts of the tissue, such as the blood vessel endothelium (E), the connective tissue (CT) and smooth muscle (SM).