Adenosine triphosphate (ATP) is an energy storing molecule in all cells. However, in several cellular systems, where it might be present in the extracellular space, ATP also serves as a neurotransmitter or hormone. Well studied examples of such systems include inflammation states, where the dead cell’s cytoplasmic content or “inflammatory soup” that contains a high level of ATP, affects lymphocytes and healthy cells. Another example is the extracellular space around synapses in the nervous system or around innervated tissue; where synaptic vesicles release neurotransmitters along with ATP (which exists at high concentrations) upon their fusion with the plasma membrane. In such cellular systems the sensing of extracellular ATP, which is translated by membrane receptors into a cytosolic signal, enables the cell to react to “the inside is coming from outside” signal.

The receptors for extracellular ATP are divided into metabotrophic (P2Y) and ionotrophic (P2X) receptors. P2Y receptors are G-Protein Coupled Receptors (GPCRs, of which 8 isoforms exist) and their downstream signaling is defined by the G proteins they are complexed with. They usually respond in a longer time range than P2X receptors and are not discussed further here.

P2X receptors are protein complexes, composed of three similar subunits that bear an ion channel within a membrane spanning domain, which gates open upon ATP binding (to an extracellular domain). All seven P2X channel isoforms (P2X1-7) are permeable to organic mono and divalent cations including Ca2+ (for review on purinergic transmission, see reference 1).

The pharmacology of P2X receptor channels is not very specific in differentiating between the various isoforms. To date, specific antibodies are the most common tool used for indicating and identifying the P2X subtype. 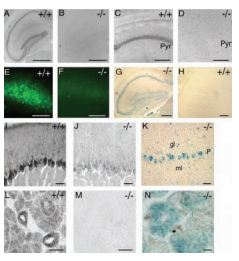 Alomone Labs specific P2X antibodies, besides having an important role in showing the localization of P2X channels, also assist in deciphering their physiological and pathological roles. We cite papers where these antibodies were used: Immunoprecipitation (IP) experiments to demonstrate physical interactions between P2X isoforms and with other proteins2-7; Western blot to demonstrate expression in cells or tissue extracts, or knockdown by siRNA or in knockout mice 3,5,6,8-18; Immunohistochemistry (IH) and Immunocytochemistry (IC) experiments to localize the expression sites and patterns of the channels using different microscopic methods5,8,11-13,15,17,19-24.

Many studies explore the roles of P2X channels in white blood cells and in tissues affected by injury as well as in neurons and glia both in the context of stress and injury and in response to synaptically released ATP.

P2X3 channel was found to be expressed in sensory neuronsusing Anti-P2X3 (#APR-016) antibody5. Upon a decrease in Nerve Growth Factor (NGF) levels, these neurons are induced to express more P2X2/3 complexes, changing ATP derived signaling. In such sensory neurons, the expression of P2X3 was shown to depend on calcitonin gene related peptide25. Using Anti P2X4 antibody, it was demonstrated that P2X4 is expressed in many tissues7; the protein was detected in brain, lung and submandibular gland of wild type and absent in tissues from P2X4 knockout mice17 (Figure 1). In the CNS P2X4 was mainly in microglia16,18,24. It was shown to be upregulated in spinal cord microglial cells following the induction of nerve injury24 (Figure 2), and in hippocampal cells following ischemia16 (Figure 3). Morphine treatment enhances microglial migration by increasing the expression of P2X418. Expression of P2X4 and other P2X receptor channels were detected in neurons innervating the carotid body O2  chemoreceptors23 (Figure 4), suggesting a role in negative feedback loop that inhibits ATP releasing chemoreceptors (during hypoxic stress). P2X4 and other P2X channels were also shown to be expressed in chicken mesenchymal cell cultures15, suggesting a role in bone development and repair. 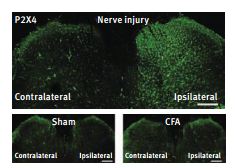 Figure 2. Marked Upregulation of P2X4 Levels in the Spinal Dorsal Horn Following Injury to the L5 Nerve.Visualization of the P2X4 protein detected by using Anti-P2X4 antibody (#APR-002) in the L5 dorsal spinal cord by immunofluorescence analysis with confocal microscopy. Photographs show the P2X4 immunofluorescence in the dorsal horn 14 days after nerve injury (top), 14 days after sham operation (bottom left) and 7 days after the injection of CFA into the plantar surface of the hindpaw, an inflammatory pain model (bottom right). Scale bars, 200µm.Adapted from reference 24 with permission of Nature Publishing Group. 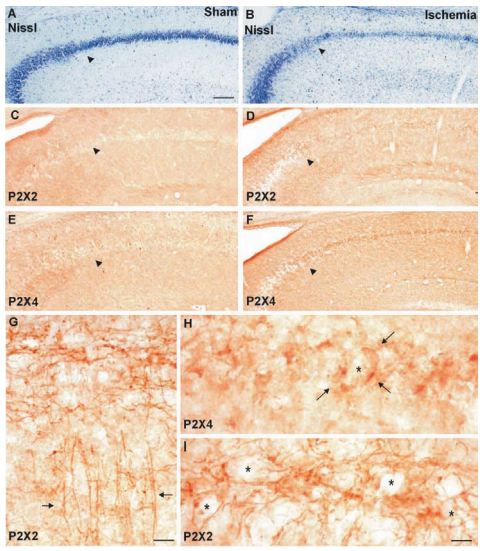 P2X4 was shown to heteromerize with P2X7 subunits by co-immunoprecipitation in an expression system6. It was also shown for both P2X4 and P2X2 that mutating the ATP binding site causes reduced surface expression of the mutated subunit14.

P2X7 receptor channel differs from all the other isoforms in that it is activated only by very high ATP concentration and in many cases P2X7 channels mediate a very robust intracellular Ca2+ elevation1. Therefore, this receptor channel is frequently implicated as a transducer of acute ATP elevation around the cell. 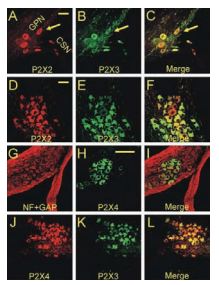 Figure 4. Localization of Purinergic Subunits in Glossopharyngeal Nerve (GPN) Neurons in situ by Confocal Immunofluorescence.Proximal neurons located at the bifurcation of the GPN and CSN expressed both P2X2 (A; red, detected with Anti-P2X2 antibody (#APR-003)) and P2X3 (B; green) immunofluorescence; note colocalization in merged images. C, Similarly, many neurons at the distal bifurcation coexpressed P2X2 and P2X3 subunits (D–F). G–I show colocalization of P2X4 purinergic subunit (green, detected with Anti-P2X4 antibody (#APR-002)) with the neuronal marker NF (red) in proximal GPN neurons. In J–L, there is colocalization of P2X4 (red) and P2X3 (green) subunits in the distal population of GPN neurons. Scale bars: A–F, 50 µm; G–L, 100 µm.Adapted from reference 23 with permission of The Society for Neuroscience.

Using Anti-P2X7 antibodies (#APR-004 and/or #APR-008, directed against intracellular and extracellular epitopes, respectively), showed that P2X7 channels are expressed in macrophages where they control IL-β release9-11. Anti-P2X7 antibody was used to immunoprecipitate the channel from macrophages, later to be blotted with anti-Pannexin-1 antibody, suggesting a physical and functional complex between the ATP receptor and the gap junction channel3.

Figure 5. Functional P2X7 Receptor Channel is Restricted to the Distal Region of the Axon and Growth Cones.A) Hippocampal neurons cultured for 3 DIV were stained with antibodies against tyrosinated α-tubulin and P2X7 (using Anti-P2X7 antibody, (#APR-004 or #APR-008)). Higher-magnification views of the boxed areas show the distal region of the axon stained for tyrosinated α-tubulin or P2X7 receptor. Scale bar: 50 µm. B) Distal region of an axon stained with anti-α-tubulin and Anti-P2X7 antibodies. Note that α-tubulin staining, unlike that of tyrosinated α-tubulin, does not display an increasing distal gradient. C) and D) Graphs representing the fluorescence intensity of tubulin (red) and P2X7 (green) along the axon in the neurons shown in A (C) and B (D), quantified using the ImageJ program. E) Images of the most distal region of the axon and the growth cone of hippocampal neurons stained with anti-tyrosinated-α-tubulin and Anti-P2X7 antibodies. Note the absence of P2X7 staining in axons running parallel to a P2X7-positive distal region of an axon, where P2X7 is located in the microtubule domain of the axon and in the actin-rich domain (inset).Adapted from reference 13 with permission of The Company of Biologists.

Although P2X7 is absent in macrophages of knockout mice, it was recently demonstrated, that functional channels are expressed in T lymphocytes of these mice (using #APR-004)11. This paper probably resolves a controversy regarding P2X7 antibody specific detection in knockout mice. In addition to the expression of P2X7 in glial satellite cells12, its expression was demonstrated in neuronal nerve terminals13,20,21. It was suggested that activation of P2X7 channels in glial satellite cells causes down regulation of P2X3 in nociceptive neurons, leading to reduced pain12. In cultured hippocampal neurons P2X7 channels are expressed in growth cones and their inhibition promotes axon growth (Figure 5)13. The expression of P2X7 in nerve endings in neuromuscular junctions was nicely demonstrated using Anti-P2X7 antibody and immunohistochemical and electron microscopy analysis (Figure 6)20. In a similar manner, the channel expression in the retina was evident in horizontal cells and was co-localized with synaptic markers21.

Figure 6. Immunoreactivity for P2X7 Receptor Subunit is Present on Presynaptic Motor Nerve Terminals from Birth Through into Adulthood.Preparations of flexor digitorum brevis muscle and tibial nerve were fixed for either immunofluorescence, immunoelectron or confocal microscopy. Preparations of NMJs double labeled with antibodies against NF165 and SV2, visualised with FITCconjugated secondary antibody (a, d and g), which labels motor axons and terminals, and P2X7 (using Anti-P2X7 antibody (#APR-004)), visualised with a TRITC-conjugated secondary antibody (b, e and h), illustrates that P2X7RS appears to be localised to motor nerve terminal from birth (0 day old, a–c) through 4 (d–f) and 7 days old (g–i). Electron microscopy of a single nerve terminal bouton confirmed that immunoreactivity for P2X7RS was confined to the presynaptic nerve terminal bouton in adults (j) and was not found on terminal Schwann cells or postsynaptic muscle fibres. A single slice taken from a confocal stack through a portion of an NMJ, double labeled for P2X7RS endodomain (green, Anti-P2X7 antibody) and P2X7 ectodomain (red) antibodies (k). Extended orthogonal projections through the confocal stack (l and m) confirm co-localisation and suggests a small spatial differentiation between the endodomain (central) and the ectodomain (peripheral) labelling, as predicted from the intra- and extracellular domains of the receptor, which these antibodies were raised against. Scale bars: a–i =10 µm, j = 500 nm, k = 5 µm.Adapted from reference 20 with permission of Elsevier.