K+ channels belong to a large class of transmembrane proteins that specifically regulate the transport of K+ ions across biological membranes. Today about 80 different K+ channels have been identified which are expressed in virtually every cell type. K+ channels are involved in a wide variety of physiological functions including neurotransmitter release, regulation of heart rate, insulin secretion, epithelial electrolyte transport and immune function. Moreover, an increasing number of hereditary human diseases can be linked to K+ channel dysfunctions including epilepsy1, cardiac arrhythmias2, skeletal muscle disorders3 and diabetes4. In addition, mounting evidence demonstrates that K+ channels are involved in cell proliferation and cancer progression. In this review we will summarize the latest findings concerning K+ channel involvement in cancer development.

K+ channels are the largest ion channel family in the human genome comprising about 80 different gene products. They can be structurally divided into three subfamilies: the voltage and Ca2+-dependent K+ channels (KV and KCa), the inward rectifying K+ channels (Kir) and the two-pore K+ channels (K2P)5.

The KV family is the largest of the three and as its name implies, the channels open in response to a voltage change (or depolarization) of the cell membrane, thus allowing an efflux of K+ ions. KCa channels open in response to a rise in intracellular Ca2+ and similarly permit the selective efflux of K+ ions from the cell. The functional KV and KCa channels are composed of four six-transmembrane (TM) α subunits arranged surrounding a central ion-conducting pore. The KCa1.1 (also known as the BKCa or Maxi-K channel) is unique in that it can respond to both membrane depolarization and a rise in Ca2+ and has an extra TM domain making it the only K+ channel with seven TM domains.

The inward rectifying Kir channels derive their name from their capacity to conduct K+ ions inward rather than outward. Kir channels activity is modulated by a remarkable array of intracellular second messengers including phosphatidylinositol bisphosophate (PIP2), G protein βγ subunits and ATP. The Kir channels have the simplest topology of the K+ channel superfamily with only two TM domains flanking the pore loop. As is the case with the KV channels, four subunits are needed for assembly into a functional channel.

The two-pore K2P channels are composed of four TM domains with two pore loops and hence their name. These channels are sometimes called “leak” or “background” channels, as they are constantly open at the physiological membrane potential. They can be modulated by various agents including changes in temperature and pH and mechanical stress.

As mentioned above, an increasing body of work shows that tumor cells express a diverse array of K+ channels and that these channels may play a role in the regulation of tumor proliferation, migration and apoptosis (see the comprehensive recent reviews in references 6-9). In this review we will summarize the most up to date information regarding the involvement of several K+ channels in tumor progression.

The KV11.1 (erg1) channel has received considerable attention since it underlies the IKr current in the heart and has a central role in mediating repolarization of cardiac action potentials. Mutations in the KV11.1 channel cause inherited long QT syndrome (LQTS) that is associated with life-threatening arrhythmias and sudden death10. Moreover, drug-induced forms of LQTS have been reported for a wide range of non-cardiac drugs including antihistamines, psychoactive agents and antimicrobials. All these drugs potently block the KV11.1 channel as an unintended side effect, prompting regulatory drug agencies to issue recommendations for the testing of new drugs for their potential KV11.1 blocking effect.

In the last few years, a growing number of studies have shown that KV11.1 is selectively upregulated in a variety of human and animal tumors while its expression is absent in the normal tissue or cell line counterparts11-17. Moreover, selective pharmacological blockage of the KV11.1 channel in several primary leukemic cells significantly reduced cell proliferation13, while in colon cancer cell lines it blocked cell invasiveness17.

It is still unclear, however, how overexpression of the KV11.1 channel contributes to the neoplastic phenotype. One possibility is that the special biophysical properties of KV11.1 channels contribute to maintain a more depolarized membrane potential (a characteristic of tumor cells) and thus permit an easier passage through the cell cycle. Another mechanism that could explain KV11.1 overexpression function in tumor development is through its interactions with several proteins involved in proliferation control. In a recent report, it was showed that the oncogene v-src (a constitutively active form of the protein tyrosine kinase src) could phosphorylate the KV11.1 channel and thus induce an increased current18. Since aberrant function of proteins in the ras-src signaling pathway is a common feature of transformed cells, src-mediated modulation could be a mechanism that regulates KV11.1 function in cancer cells. Another study showed that the KV11.1 channel expressed in cell lines and primary tumors was preferentially a heterotetramer formed by the “regular” KV11.1 gene transcript and an alternative splice variant termed KV11.1-b (herg1b). The biophysical properties of the resulting channel, turned out to be quite different than those exhibited by KV11.1 in normal cells. In addition, the expression of the two KV11.1 protein isoforms was strongly cell cycle-dependent16.

Another study demonstrated that KV11.1 protein physically interacted with the tumor necrosis factor receptor type 1 (TNFR1) in the cell membrane of tumor cell lines15. TNFR1 is the ubiquitously expressed receptor for the TNFα cytokine that can mediate both cell proliferation and apoptosis in many cells. The significance of its interaction with the KV11.1 channel however, is not clear.

In addition, KV11.1 was found to interact with the adaptor protein 14-3-3, a family of conserved proteins involved in the control of cell cycle regulation, apoptosis and adhesion19.

Another KV channel that has been directly implicated in malignant transformation is the KV10.1 channel. The KV10.1 channel current is characterized by outward rectifi cation without inactivation and slow activation kinetics. Its expression is normally confined to the brain where its physiological function has not yet been clarified. However, several groups found evidence indicating that KV10.1 was inappropriately expressed in several cancer cell lines and in human primary tumors21-23. Moreover, one study showed that KV10.1 by itself had oncogenic potential as a cell line transfected with the channel induced aggressive and faster tumor growth in vivo as compared to a cell line transfected with an unrelated KV channel22. The same study also showed that inhibition of KV10.1 expression with antisense oligonucleotides was sufficient to decrease the proliferation of various cancer cell lines. As is the case for the KV11.1 channel, the contribution of KV10.1 to tumor development is believed to be related to its ability to modulate cell cycle progression. 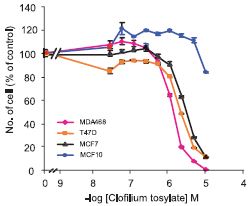 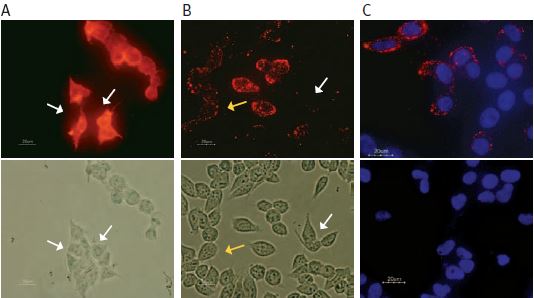 Cell Surface Expression of the KV11.1 (KCNH2, HERG) K+ Channel(A) Human embryonic kidney (HEK) cells transfected with the native KV11.1 channel were fixed, permeabilized and stained with an Anti-KCNH2 (HERG) Antibody (#APC-062) that recognizes an epitope situated at the cyoplasmic C-terminus end of the channel. The antibody was visualized with a goat-anti-rabbit Alexa-555 secondary antibody (in red-upper panel). Note that almost all cells are positively stained. White arrows indicate cells that do not express the KV11.1 channel. (B) Staining of live intact HEK-KV11.1 cells with Anti-KCNH2 (HERG) (extracellular) Antibody (#APC-109) followed by goat-anti-rabbit Alexa-555 secondary antibody. About half of the cells show little (yellow arrows) or no staining (white arrows) while others have strong staining. Indicating that surface expression of the channel does not fully correlate with total cell channel expression (as seen in (A)). (C) Specificity of the Anti-KCNH2 (HERG) (extracellular) Antibody was confirmed by incubating intact living HEK-KV11.1 cells with the antibody (upper panel) or with the antibody preincubated with the negative control antigen (bottom panel), followed by goat-anti-rabbit Alexa-555 secondary antibody (red staining). Cell nuclei were stained with the cell permeable dye Hoechst 33342 (blue staining). 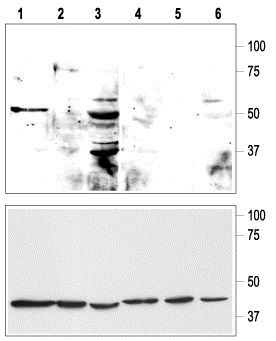 Overexpression of KCNK9 K+ Channel in Tumorigenic Cancer Cell LinesProteins, lines 1 and 4 rat cerebellum lysate, lines 2 and 5 MCF-10A human mammary gland (fibrocystic disease) and lines 3 and 6 MCF-7 human mammary gland (adenocarcinoma), were separated in a SDS-PAGE gel and sequentially probed with Anti-KCNK9 (TASK-3) Antibody (#APC-044) (upper panel) and anti-β actin to ensure equal loading (lower panel). In lines 4, 5 and 6 the antibody was preincubated with the negative control antigen. Note that the expected 50 kD MW band is present in cerebellum and in the tumorigenic breast cancer cell line (MCF-7) but not in the non-tumorigenic breast cell line (MCF-10A). 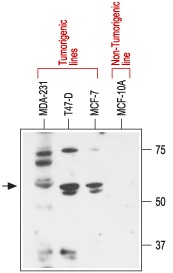 Expression of Kir3.1 K+ Channel in Breast Cancer Cell LinesCell lysates from three tumorigenic breast cell lines and one non-tumorigenic were separated in a standard SDS-PAGE and analyzed by Western blotting with an Anti-GIRK1 (Kir3.1) Antibody (#APC-005). Note that the antibody a band of the appropriate size (arrow) in the three tumorigenic lines but not in the nontumorigenic one.

The KCNK9 K+ channel (also known as TASK-3 or K2P9.1) belongs to the two-pore K+ channel family. As mentioned above, members of this family show little time or voltage dependence and therefore are continuously open at physiological membrane potentials and thereby help set the resting membrane potential. KCNK9 is expressed at low levels in normal tissues except in the brain where it is widely distributed and its expression overlaps with the structurally related KCNK3 (TASK-1, K2P3.1) channel.

The physiological role of the KCNK9 channel is not yet clear, though it was proposed to participate in breathing, aldosterone secretion, anesthetic mediated neuronal activity and in cerebellar
granule neuron apoptosis24,25.

The KCNK9 gene was found to be amplified in 10% of breast cancer samples while the KCNK9 protein was overexpressed in breast, lung, colon and prostate cancers26. Moreover, overexpression of KCNK9 in cell lines promotes tumor growth and confers resistance to hypoxia and serum deprivation26.

As is the case with the above mentioned examples, the mechanism by which KCNK9 overexpression exerts its oncogenic properties is not clear, but it requires a functional channel since point mutations in the channel that abrogate its ability to transfer K+ ions, eliminates the oncogenic properties of KCNK927.

Several other K+ channels have been implicated in cancer development although their functional roles are less established.

The voltage-dependent KV1.3 channel has been detected by immunohistochemistry methods in both colon and breast cancer samples while the normal tissue counterparts showed no detectable KV1.3 expression28,29. The KV1.3 channel is expressed in normal lymphocytes and macrophages (as well as in the brain) where it has a critical function in regulating Ca2+ entry and T cell proliferation30.

Kir3.1 (also known as GIRK1) mRNA expression was upregulated in about 30% of invasive breast cancer and in 60% of non-small-cell lung cancer specimens examined. The upregulation of the Kir3.1 mRNA was correlated in both cases with poor prognostic outcome31,32. Kir3.1 is a member of the G-protein regulated inward-rectifier K+ (GIRK) channel subfamily which is part of the inward-rectifier (Kir) K+ channel family. Kir3.1 can be activated by neurotransmitters and other factors via the activation of G-protein coupled receptors. Binding of the corresponding ligand (for example acetylcholine or adrenaline) to their respective G-protein receptor induces the dissociation of Gα-GTP from the Gβγ dimer. The latter directly binds to Kir3.1 and activates the channel. Kir3.1 is normally expressed in the brain and heart33.

Finally, members of the Ca2+-dependent K+ channel (KCa) family, the KCa1.1 (also known as Maxi-K or BKCa) and the KCa3.1 (also known as SK4 or IKCa) have been implicated in the progression of several cancers including gliomas, melanomas and pancreatic cancer34-36.

In the last several years several K+ channels have been identified at the molecular level as having a direct involvement in tumor progression. For the most part the molecular mechanism by which ion channels modulate tumor growth is unknown. In any case, a substantial array of toxins and drugs that specifically modulate the activity of K+ channels is already available. Therefore it is conceivable that in the near future these or other ion channel-targeted molecules will become a valid addition to the growing arsenal of anticancer drugs.