The Sexiest Channels Alive: The Role of Ion Channels in Penile Erection

The centrality of the corporal myocyte function in penile erection and sexual function is underscored by the fact that more than 80% of patients with erectile dysfunction can be treated by methods that induce smooth muscle relaxation of the penis.

The delicate balance of intracellular Ca2+ concentration is tightly regulated by several ion channels and intracellular mediators and will be discussed in some detail below. For a simplified illustration of the molecular mechanisms governing corporal smooth muscle contraction and relaxation see Figure 1. 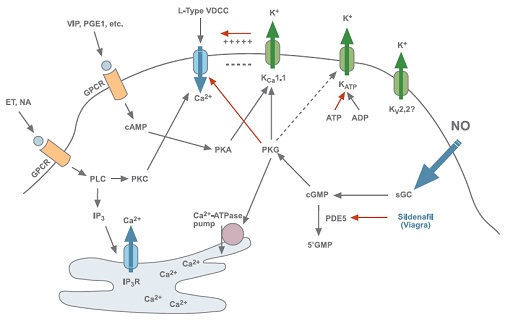 1. Keeping the Intracellular Ca2+ High and the Penis Down (Flaccid State)

High intracellular Ca2+ concentration is achieved by two means: release of Ca2+ from the sarcoplasmic reticulum (the intracellular compartment for Ca2+ storage) and entry of Ca2+ through the plasma membrane.

Release of Ca2+ from the sarcoplasmic reticulum (SR) is achieved through the opening of ligandgated IP3receptors (IP3R) present in the SR membrane. Levels of the ubiquitous second messenger IP3 are increased after phospholipase C (PLC) hydrolyzes phosphatidylinositol 4, 5- biphosphate (PIP2) to 1,2-diacylglicerol (DAG) (which activates protein kinase C) and IP3.1,2 PLC in turn is activated by receptors coupled to GTP binding proteins or G-protein coupled receptors (GPCRs). The best characterized GPCRs involved in inducing high intracellular Ca2+ (and therefore maintaining the penis in a flaccid state) are the α-adrenoreceptor (activated by noradrenaline) and the ETA receptor (activated by endothelin).

Corporal smooth muscle cells receive high adrenergic inervations, which release the neurotransmitter noradrenaline (NA) that is widely believed to be the main agent responsible for keeping the corporal myocyte in a contracted state and the penis in a relaxed one.1 NA acts by binding to the α-adrenoreceptor family that consists of α1 (α1A, α1B, α1D) and α2 (α2A, α2B, α2C) subtypes. The exact receptor subtypes involved in corporal myocyte contraction is a matter of some debate but adrenergic receptors of the α1 subtype are believed to be the dominant ones.1,3

Another agent believed to be important in maintaining high intracellular Ca2+ levels through the PLC/IP3pathway in the corporal smooth muscle are the endothelins (ET). ET belongs to a family of peptides that are synthesized mainly in endothelial cells as a precursor that is subsequently cleaved and released in its mature form. In corporal myocytes ET acts by binding to the ETA subtype receptor that induces a rise in intracellular Ca2+ concentration leading to myocyte contraction.1,4

In addition to the release of Ca2+ from the intracellular sarcoplasmic stores, keeping a high cytosolic Ca2+concentration requires Ca2+ entry from the extracellular space. In corporal myocytes (as in other smooth muscle cell types) this is achieved mainly by the opening of L-type voltage-dependent Ca2+ channels situated in the plasma membrane. The L-type voltage-dependent Ca2+ channels (so called because of their longlasting activation) include four members: CaV1.1, CaV1.2, CaV1.3 and CaV1.4. These channels open in response to a strong membrane depolarization and remain activated for relatively long periods of time, allowing the continuous influx of Ca2+ into the intracellular space. In addition, the channels can also be regulated by several signaling mechanisms including PKC-mediated phosphorylation (that enhances channel activity) and protein kinase G (PKG) (that inhibits channel function).2,5

2. Keeping the Intracellular Ca2+ Down and the Penis Up (Erection)

As stated above, penile erection is the end result of smooth muscle relaxation that can be initiated by sensory stimulation that activates the CNS (i.e following visual, auditory, etc.) pathways. The CNS activates peripheral nerves that innervates the penis and include cholinergic and nonadrenergic-noncholinergic (NANC) nerves among others.6

The best characterized relaxation-inducing agent is nitric oxide (NO) that is released from the NANC nerves (also called nitrergic). NO can also be released by the endothelial cells surrounding the corporal smooth muscle cells. NO is a product of the processing of L-Arginine by the nitric oxide synthase (NOS) enzyme.7

NO diffuses into the corporal smooth muscle where it activates the soluble guanylyl cyclase (sGC) enzyme to produce the second messenger cGMP. cGMP in turn activates PKG which lowers the intracellular Ca2+concentration by multiple mechanisms.

One of these mechanisms is the activation of the Ca2+-dependent K+ channel KCa1.1 (also known as KCNMA1, Maxi-K or BKCa). The KCa1.1 is a member of a specialized type of K+ channels that can be activated by both membrane depolarization and high intracellular Ca2+. Activation of the channel produces an efflux of K+ along its electrochemical gradient and a concomitant membrane hyperpolarization. This in turn closes the voltage-dependent L-type Ca2+ channels, effectively lowering the cytosolic Ca2+ concentration producing corporal smooth muscle relaxation and penile erection.8,9 As mentioned above, PKG may also act directly on voltage-dependent Ca2+ channels to close the channels and terminate Ca2+ entry into the cell. Another mechanism by which PKG lowers the cytosolic Ca2+ concentration is by activating the sarcoplasmic Ca2+-ATPase pump that takes Ca2+ from the cytosol and into the luminal side of the sarcoplasmic reticulum.

The central role of the NO/cGMP/PKG signaling pathway in penile erection is demonstrated by examining the mechanism of action of sildenafil (Viagra, Pfizer Inc., New York), the popular drug for erectile dysfunction. Sildenafil is a phosphodiesterase (PDE) inhibitor, an enzyme that catalyzes degradation of cGMP. There are six subtypes of PDEs (PDE1-PDE6), each with its own tissue distribution and substrate specificity. PDE5, the specific target of sildenafil is highly expressed in corporal smooth muscle cells. Thus, inhibition of PDE5 keeps cGMP levels in the corporal myocytes elevated longer, therefore allowing a more pronounced cytosolic Ca2+decrease and stronger erections.10

Similarly, the importance of the KCa1.1 channel in penile erection has also been demonstrated by the use of inhibitors such as the toxin Charybdotoxin or by examination of knockout mice lacking the KCa1.1 gene.11,12In both cases corporal smooth muscles were unable to relax and therefore to maintain an erection. Conversely, openers of the KCa1.1 channel have been studied as drugs for erectile dysfunction. An orally available KCa1.1 opener (BMS-223131) was evaluated in this regard while more recently, a gene transfer therapy protocol with the KCa1.1 gene underwent Phase I clinical trials.9,13,14 In either case, the idea is that by increasing either the open probability or the expression of the KCa1.1 channel, smooth muscle membrane hyperpolarization and the concomitant decrease in cytosolic Ca2+ will be greater, therefore leading to more potent erections.

It is worth mentioning that increased expression of the KCa1.1 channel in corporal smooth muscle as a result of gene therapy won’t cause per se relaxation of the smooth muscle and erections. Since the channel is essentially quiescent in the smooth muscle cells in the contracted state, only activation of the signaling pathway (i.e. through the NO/PKG pathway) will open the channel and produced the required membrane hyperpolarization and penile erection. Another advantage to the gene therapy approach is that its effect will last for a few months. This is in contrast to the effect of oral drugs such as sildenafil that must be used in advance and whose effect lasts only a few hours.14

It should be emphasized that the KCa1.1 channel contributes to corporal cell relaxation in response to other signaling pathways and not only to the NO-PKG one. For example, the prostanoid prostaglandin E1 (PGE1) has been extensively used as a therapeutic agent for the treatment of erectile dysfunction. PGE1 signals to the corporal smooth muscle cells via a GPCR that activates the enzyme adenylate cyclase and increases cAMP levels in the cell. cAMP in turn activates the protein kinase PKA that stimulates the KCa1.1 channel.15 Other agents known to induce corporal smooth muscle relaxation such as vasoactive intestinal peptide (VIP) and calcitonin generelated peptide (CGRP) probably work along the same pathway.1,6

Besides the KCa1.1 channel other K+ channels have been shown to play an important role in penile erection. The most physiologically relevant K+ channel in addition to KCa1.1 is the KATP channel. The KATP channels are heteromultimers of two radically different subunits. The first component is the pore-forming subunit that is composed of members of the inward rectifier Kir6.x subfamily and includes two members: Kir6.1 and Kir6.2. The other component of the KATP channels is the sulfonylurea receptor (SUR) that is a member of the ATP-binding cassette (ABC) superfamily. There are three different isoforms of the SUR subunit SUR1, SUR2A and SUR2B, where the last two are alternative splice variants of the same gene.

Finally, other K+ channels such as KV2.2 have been described as well in corporal smooth muscle but their physiological significance remains to be established.17

Penile erection is a complex process that involves the coordinated function of neural, vascular and smooth muscle cells in the penis. The harmonized function of these cellular types ultimately results in smooth muscle relaxation and therefore penile erection. Ion channels have a tremendous importance in these processes and have been identified as potential targets for the development of therapies for the treatment of erectile dysfunction.

Given that the most successful erectile dysfunction therapy today, the PDE5 inhibitor sildenafil (Viagra), is effective in only about 60% of men and has significant side effects, there is an increasing interest in developing better therapies. Ion channels could well be the new therapeutic frontier for penile erection in the 21st century. 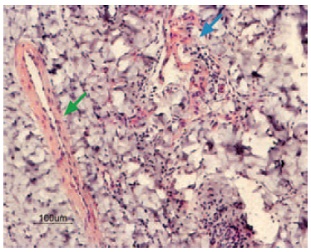 Expression of KCa1.1 in Rat PenisTransversal section of the rat penis was stained with Anti-KCNMA1 (KCa1.1) (1184-1200) Antibody (#APC-107). Strong and specific immunostaining is evident in both corpus cavernosum smooth muscle cells (blue arrow) and in the muscular layer of the penis artery (green arrow). Universal Immuno-alkalinephospathase Polymer followed by New Fuchsin Substrate Histofine, Nichirei Corp) was used for the colour reaction. Counterstain is Hematoxilin. 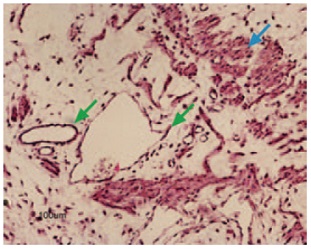 Expression of Kir6.1 in Pregnant Rat UterusLongitudinal section of the myometrium in pregnant rat uterus stained with Anti-Kir6.1 (KCNJ8) Antibody (#APC-105) (1:50). Strong and specific staining is evident in smooth muscle cells both in the myometrium (blue arrow) and muscular layers of blood vessels (green arrows). Peroxidase reaction with DAB were used for the colour reaction. Counterstain is Hematoxilin.