The Na+/Cl- transporter family SLC6, includes DAT, a monoamine transporter, important for regulating extracellular levels of dopamine. It does so by taking up dopamine from the synaptic cleft via the co-transport of Na+ and Cl- down their electrochemical gradients1. The removal of dopamine by DAT remains the most important means to control the extracellular lifetime of the neurotransmitter and notably, the ending of dopaminergic neurotransmission2. Transporters for serotonin, norepinephrine, GABA and glycine also belong to this family3.

These receptors have 12 transmembrane spanning domains and intracellular N- and C-termini. DAT is also subject to post translational modifications such as phosphorylation, important for its regulation1. It also possesses a large extracellular domain which undergoes N-glycosylation, important for the proper targeting of the transporter to the plasma membrane1. DAT is expressed in dopaminergic cell bodies and terminals and can therefore serve as a marker for these neurons4. DAT is also expressed in the retina, gastrointestinal tract, lung, kidney, pancreas and lymphocytes2.

DAT plays an important role in movement as well as reward, learning and memory5. Its malfunction, which leads to dopaminergic dysregulation, has been associated with ADHD, schizophrenia, as well as Parkinson’s disease2. DAT is the main target for cocaine, amphetamine and methamphetamine psychostimulants, which mainly increase locomotor activities2. 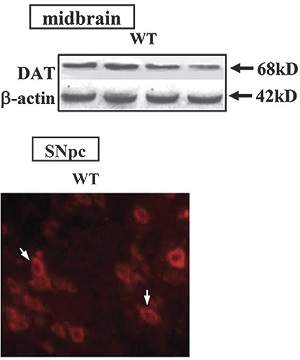