Hyperpolarization-activated cation currents (Ih) appear in the heart and the brain and have a crucial role in controlling electrical pacemaker activity, contributing to biological processes such as heartbeat, sleep-wake cycle and synaptic plasticity.1,2

The Ih currents are generated by the hyperpolarization-activated cyclic nucleotide-gated channel family (HCN), which is comprised of four homologous members, HCN1-4.

Each HCN subunit consists of six transmembrane domains (TM), a pore region between TM5-TM6 and a binding domain for cyclic nucleotides (CNBD) in the cytoplasmic C-terminus.2 The HCN subunits can form functional homomers and can also co-assemble into functional heteromers.2

The channels are closely related to each other and share a homology of about 60%. However, their similarity decreases in the cytoplasmic N- and C-termini. The channels HCN1-4 mainly differ from each other in their speed of activation and the extent to which they are modulated by cAMP. HCN1, weakly affected by cAMP, is the fastest channel, followed by HCN2, HCN3 and HCN4.

HCN1 is extensively expressed in the brain, in specific areas like the neocortex, hippocampus, cerebellum and superior colliculus.2,3 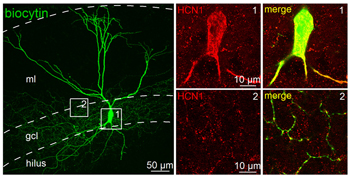 Expression of HCN1 in perisoma-inhibiting interneurons (PIIs) of the dentate gyrus.Immunocytochemical staining of perisoma-inhibiting interneurons using Anti-HCN1 Antibody (#APC-056). HCN1 expression (green) is detected in the soma and axon colaterals. Biocytin was used to label neurons.Adapted from Elgueta, C. et al. (2015) with permission of the Society for Neuroscience.

Anti-HCN1 Antibody (#APC-056) is a highly specific antibody directed against an epitope of the rat protein. The antibody can be used in western blot, immunohistochemistry and immunocytochemistry applications. It has been designed to recognize HCN1 from human, rat, and mouse samples.