D-2-Amino-5-phosphopentanoic acid (D-AP5) is an NMDA receptor antagonist that competitively inhibits the glutamate binding site of NMDA receptors with an IC50 value of 30 µM2. D-AP5 has been shown to cause damage in memory and learning processes and has the ability to trigger synaptic potentiation in the mature hippocampus2.

Blockade by NMDA antagonists may cause glutamate-elicited calcium influx. In addition, it is known for its antinociceptive action.

The NMDA receptor plays important physiological and pathological roles in the central nervous system. The receptor binds the neurotransmitter L-glutamate and meditates the majority of the fast excitatory neurotransmission in the mammalian brain. In addition, it induces current formation in neurons. Evidence shows that the inhibitory effects of AP5 are independent of membrane potential but decrease with increasing stimulation frequency1,2.

Several studies have suggested that local blockade of NMDA receptors attenuates chronic tinnitus, thus D-AP5 could have a clinical role in tinnitus protection3. Administration of D-AP5 reverses axotomy effects such as contractile properties and locomotor behavior in animals without any observable side-effects. D-AP5 may present therapeutic potential in other models of excitotoxic injuries4. 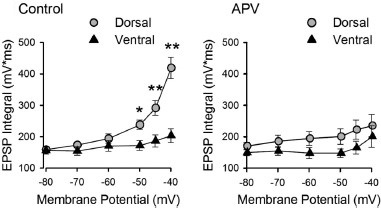