Powered by Bioz See more details on Bioz
Cat #: N-240-B
Alternative Name Nerve Growth Factor 2.5S
Lyophilized Powder yes
Origin Native protein isolated from mouse submaxillary glands.
Source Modified natural protein
MW: ~26 kDa
Purity: >98%
Effective concentration EC50 = 0.5 nM.
Label Sulfo-NHS-LC-Biotin (~556 Da) was used for labeling mouse NGF 2.5S (Grade I). The extent of labeling is 3 molecules of biotin per one molecule of mouse NGF 2.5S (Grade I). The biotin is covalently conjugated to the N-terminus or to lysine residues present in the mouse NGF 2.5S (Grade I).
Activity NGF is purified in three forms: the 7S, 2.5S and β. The 2.5S form is 9 amino acids shorter than the β form because of proteolysis that occurs during the purification process1. NGF has been shown to regulate neuronal survival, development, function and plasticity2. The biological effects of NGF are mediated by two receptors: TrkA, which is specific for NGF, and p75NTR, which binds all the neurotrophins3.
References-Activity
Shipping and storage Shipped at room temperature. Product as supplied can be stored intact at room temperature for several weeks. For longer periods, it should be stored at -20°C.
Solubility Sterile water, DMEM at a concentration of at least 10 μg/ml. Centrifuge all product preparations before use (10000 x g 5 min). Repeated freezing/thawing might result in loss of activity.
Storage of solutions Up to one week at 4°C or four-six weeks at -70°C.
Our bioassay
References - Scientific background
Scientific background 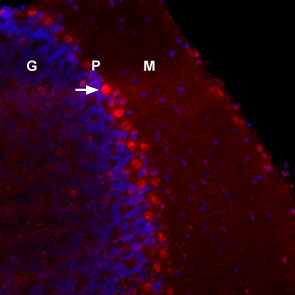