With you from start to finish and beyond

Alomone Labs is a leading developer, producer and supplier of reliable research tools for membrane proteins. By leveraging 30 years of experience and scientific excellence, we produce tried, tested and trusted products.

We provide you with the best research tools you need so that you can focus on your research.
When you succeed, we succeed.

Alomone Labs is a pioneer 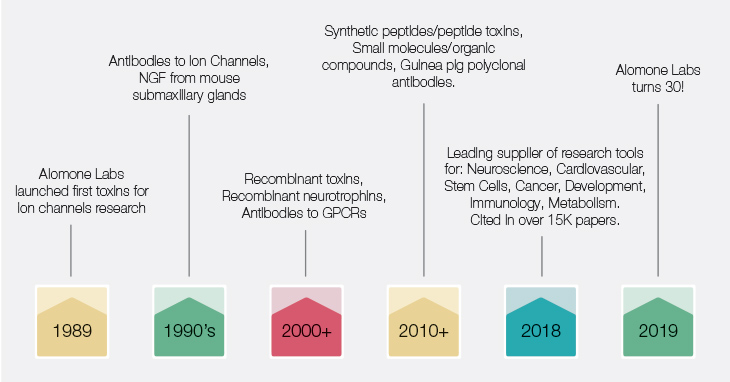 We use cutting edge technology

Alomone Labs began its journey by understanding the novel connection between the esoteric world of venomous animals and membrane proteins. Soon after the release of Charybdotoxin and Dendrotoxins, came Apamin, MCD peptide, α-Latrotoxin; all isolated from animal venom. Alomone Labs quickly gained its reputation as the “Toxin Supplier”. As technology progressed, Alomone Labs moved from “milking” the venom and isolating toxins (where possible) to producing toxins recombinantly. Nowadays, The Company uses cutting edge technology to produce synthetic toxins/peptides, thereby significantly increasing the rate at which new products are developed. With increasing demand, Alomone Labs now markets hundreds of organic compounds/small molecules used as agonists/antagonists, openers/blockers, activators/inhibitors by many membrane proteins.

Our antibodies serve thousands of researchers

In parallel to producing peptide toxins in the early 1990’s, Alomone Labs confronted the challenge to design, produce, and market highly specific rabbit polyclonal antibodies to membrane proteins, namely ion channels, at a time where the majority of the scientific community believed that ion channels were simply “there” to enable the passage of ions in and out of the cell. Today, Alomone Labs designs, produces, and markets rabbit and guinea pig polyclonal antibodies to membrane proteins, namely Ion Channels, G-Protein Coupled Receptors (GPCRs), Transporters/Exchangers/Pumps, Neurotrophic Factor Receptors, and numerous neural signaling proteins. Our antibodies serve thousands of researchers in the fields of neuroscience, cardiovascular, cancer, stem cell, development, immunology, and metabolism research.

We take pride in our product citations. With a very specific and niche-oriented product portfolio, we have reached over 15K citations in only 30 years. Seeing Alomone Labs mentioned in high-impact journals like Science, Nature and Cell, to name just a few, means the world to us.

We proudly put together the Modulator, GPCR Pathways, and Neurotrophin Pathways magazines – a tribute to you, our dedicated research collaborators, scientists, who throughout the years have become true partners of Alomone Labs, and to younger scientists who are just beginning their journey. These magazines do not focus on what Alomone Labs has to offer but rather, acknowledge the exciting data collected, and most importantly, the impact We have in advancing research of important diseases like Alzheimer’s Disease, Parkinson’s Disease, Epilepsy and more.