KCNE3 (or MiRP2) is a member of a family of proteins that regulate the activity of voltage-dependent K+ channels. Other members of the family are KCNE1 (IsK, MiNK), KCNE2 (MiRP1), KCNE4 (MiRP3) and KCNE5 (MiRP4).

KCNE1 is the founding member of the family and was initially believed to form a K+ channel itself, but was later recognized to work as a regulatory b subunit associated with the KV7.1 (KCNQ1) a protein. KCNE3 was discovered based on its homology with KCNE1.

The KCNE regulatory subunits are small proteins (14-20 kD) with a type-1 integral membrane topology. It is believed that both the cytoplasmic C-terminus tail and the transmembrane domain are necessary for the interaction with the a subunits. The stoichiometry of the KCNE subunits with their partner a subunits in the native channels is not clear and ratios ranging from 2 to 14 KCNE subunits per 4 a subunits have been proposed.

KCNE3 is relatively widely expressed in several tissues with prominent expression in the kidney and skeletal muscle.

KCNE3 is quite promiscuous and associations with KV7.1, KV3.4, KV7.4 (KCNQ4), KV11.1 (HERG), KV2.1 and KV3.1b have been demonstrated. The best characterized interactions are with the former two proteins. KCNE3 interacts with KV7.1 in epithelial cells of the gastrointestinal tract where it appears to be important for Na+ absorption. In skeletal muscle, KCNE3 couples to KV3.4 to regulate muscle function. Indeed, a mutation in KCNE3 (R83H) has been associated with an inherited form of periodic paralysis (Thyrotoxic hypokalemic periodic paralysis). 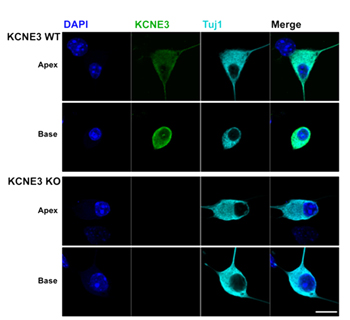 Anti-KCNE3 (MiRP2) Antibody (#APC-118) is a highly specific antibody directed against an epitope of the human protein. The antibody can be used in western blot, immunocytochemistry and immunohistochemistry applications. It has been designed to recognize KCNE3 from rat, mouse, and human samples.