α-Latrotoxin: A Potent Inducer of Secretion

α-Latrotoxin is a 130 kD protein toxin that is found in the black widow spider venom and is the only protein in the venom that affects mammals. α-Latrotoxin affects the nervous system of the bitten organism by causing massive transmitter release in many synapses, emptying the signaling reservoir at once which paralyzes the prey. Owing to these characteristics and to the vast knowledge that has been accumulated regarding its mode of action, Alomone Labs’ α-Latrotoxin is an effective molecular tool in the study of secretion, both in synapses and in endocrine systems as is reviewed in this brief report.

α-Latrotoxin binds to two types of receptors on presynaptic nerve endings: Neurexin and Latrophillin (CIRL). These interactions facilitate the formation of α-Latrotoxin tetramers which function as cation-selective pores in membranes. Both receptors are essential for the toxin pore formation mechanism (membrane integration) but not for the toxin induced exocytosis. The binding of α-Latrotoxin to neurexin is Ca2+-dependent while its binding to CIRL is Ca2+ independent. Cation-selective pores formed by α-Latrotoxin can induce release by allowing Ca2+ to enter into the terminal, forming a Ca2+-dependent release pathway (which is essential for triggering the release of monoamines or peptides from synapses). However, in synapses transmitting GABA, glutamate or Ach, release also occurs in Ca2+ free conditions. This is probably achieved in addition by direct interaction of α-Latrotoxin with synaptic proteins, which bypasses the Ca2+ binding event and leads to activation of exocytosis1,2.

Figure 1. α-Latrotoxin Fails to Increase Recycling Vesicle Pool Size or the Number of Vesicles Released in DTB-Treated Mice.A) and B) Representative images showing the time course of FM1-43 destaining triggered by bath application of 2 µg/ml α-Latrotoxin (#LSP-130) in an untreated terminal and a dim terminal from a DTB-treated mouse. The destaining in untreated terminals appeared to be uniform throughout a terminal and was almost completed in 60 min. In DTB-treated dim terminals, α-Latrotoxin caused redistribution of FM1-43 fluorescence within the nerve terminals, but did not cause dye destaining. C) The average intensity of fluorescence measured before and at 20 and 60 min after α-Latrotoxin application. The data are presented as the intensity normalized to the average fluorescence values prior to α-Latrotoxin treatment (control). The data are the means ± SE of 4 untreated and 5 DTB-treated mice, respectively. *, a value significantly different from untreated control (P ≤ 0.01).Adapted from reference 19 with permission of The American Physiological Society.

α-Latrotoxin, at sub-nanomolar and nanomolar concentrations, induces secretion in several types of cellular systems. Its effect was examined in CNS and NMJ preparations, where the toxin causes neurons to release neurotransmitters as well as in other secreting (mainly endocrine) systems where the toxin induces hormone secretion. Therefore, α-Latrotoxin is a very efficient molecular tool to be used in studies of these processes. 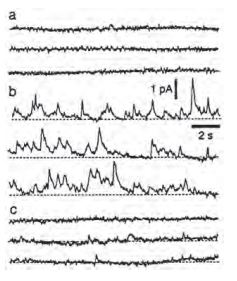 Figure 2. Increased Electrochemical Activity in Sympathetic Nerve Terminals in Rat Mesenteric Arteries Following α-Latrotoxin Treatment.Three traces recorded before A), 10 min B) and 25 min C) after the addition of 1 nM α-Latrotoxin (#LSP-130).Adapted from reference 6 with permission of Blackwell Publishing Ltd.

Alomone Labs’ α-Latrotoxin (#LSP-130) (0.3-1 nM) was used to influence smooth muscle contraction or relaxation, by causing transmitter release from enteric as well as sensory neurons that innervate such muscles3-9. Transmitter release was also monitored directly in sympathetic10-12 or DRG neurons13 and the influences of 1-3 nM toxin was examined (Figures 1,2,3,4). 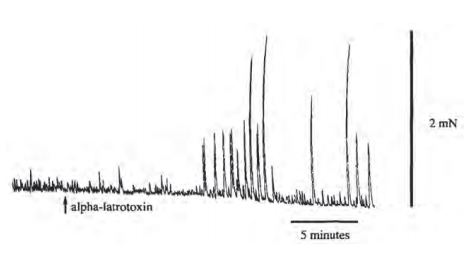 Figure 3. Enhanced Recording of Spontaneous Contractions of the Circular Muscle of the Guinea-Pig Distal Colon Circular Muscle in Response to α-Latrotoxin.Strips of circular muscle and attached myenteric plexus were mounted in organ baths and circular muscle contraction was measured with isometric transducers. A number of drugs was added to block transmission from all but the excitatory motor neurons. Atropine was also added to isolate the non-cholinergic component of transmission. In these conditions, α-Latrotoxin (#LSP-130) produced an increase in the amplitude of spontaneous contractions after a delay of 10 min.Adapted from reference 3 with permission of Elsevier.

Figure 4. Ultrastructural Features of Control and α-Latratoxin Treated Neuromuscular Juntions.A) Control, non-treated NMJ. The pre-synaptic region of the terminal is filled with closely packed synaptic vesicles. Mitochondria (m) stain darkly, and have well defined and closely apposed cristae. The basal lamina is visible both within the synaptic cleft (arrow), and extending down between individual junction folds. A capping Schwann cell (SC) extends processes (arrowheads) over the surface of the terminal, but these do not extend into the synaptic cleft. Scale bar = 600 nm. B) α-Latratoxin (#LSP-130) treated NMJs appeared extremely swollen and electron-lucent, and the post-synaptic junctional folds (arrow) were flattened. Clusters of mitochondria (arrowheads) in an advanced state of degeneration are evident within the nerve terminal. Scale bar = 1.8 µm.Adapted from reference 18 with permissions of Prof. Willison, H.J of University of Glasgow Division of Clinical Neurosciences and Oxford University press.

In the central nervous system (CNS), α-Latrotoxin is also a very potent inducer of secretion and therefore is widely used as a tool to study the regulation of synaptic transmission. It was used in vivo (0.5-3 nM) to stimulate secretion, and later to monitor the presence of β-Amiloide peptides in brain fluids29 or neurotransmitter levels following synaptic activation30 (Figure 5).

Figure 5. Extracellular β-Amiloide Peptide Levels Are Directly Linked to Synaptic Vesicle Exocytosis.Acute brain slices were made from 4- to 5-week-old wild-type (B6/SJL) or Tg2576 mice. A) To determine the effect of synaptic vesicle exocytosis on extracellular β-Amiloide peptide levels in the absence of synaptic activity, Tg2576 brain slices were cultured for 2 hours in the presence of 0.5 nM α-Latrotoxin (#LSP-130) and/or a cocktail of activity inhibitors including 100 nM TTX, 10 mM NBQX, and 50 mM APV. α-Latrotoxin alone caused a 35%±6.9% increase in β-Amiloide peptide levels, whereas the inhibitor cocktail lowered β-Amiloide peptide levels by 18.0% ±4.1% compared to untreated slices. α-Latrotoxin plus the inhibitor cocktail resulted in 13.3% more extracellular β-Amiloide peptide as compared to untreated slices and 38.3% ± 6.2% more β-Amiloide peptide compared to the inhibitor cocktail alone (n = 12-15 per group). At the end of each experiment, brain slices were washed with PBS and processed by Western blot analysis for the presence of APP-CTF. B) Neither the level of α-CTF nor the level of β-CTF changed over the 2 hours culture period. C) Representative lanes from Western blot. Data represent mean ± SEM.Adapted from reference 29 with permission of Elsevier.

In studies of the various functions of central synapses such as synaptic inhibition, presynaptic inhibition, synaptic machinery and growth cone physiology, α-Latrotoxin is used at very low concentrations (0.5-10 nM) to induce secretion31-42. Particularly, in the hippocampus (synaptosomes, tissue culture and slices), several groups have studied the effect of continuous transmitter release, induced by α-Latrotoxin, on the biochemistry and biophysics of synapses43-52 (Figure 6). 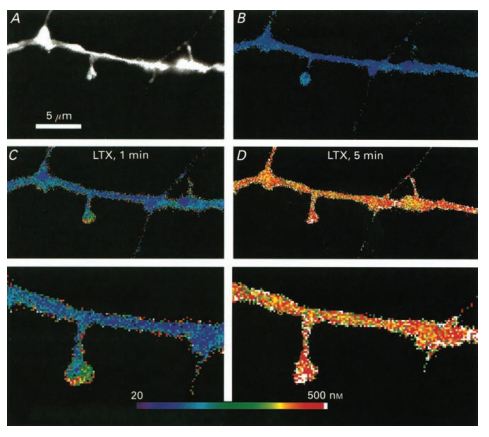 Figure 6. α-Latrotoxin Reduces a Rise of [Ca2+]S in Cultured Rat Hippocampal Neurons.Pseudocolour images of calculated calcium concentrations in a dendritic segment. A) An image of the dendrite and spines illuminated at 360 nm. A small spine is seen on the right, in close approximation to a passing fibre originating in an adjacent, stained neuron. B) Resting level of [Ca2+] in the dendrite and the spines. C) 1 min after onset of exposure to α-Latrotoxin (#LSP-130), a rise of [Ca2+] is clearly higher in the two spines seen than in the dendrite. D) When calcium rises throughout the dendrite, 5 min following application of α-Latrotoxin, there is a smaller difference between spines and the dendrite. Bottom, corresponding high power images of those seen in C) and D). Note the gradient of calcium rise in the spine.Adapted from reference 50 with permission of Blackwell Publishing Ltd. 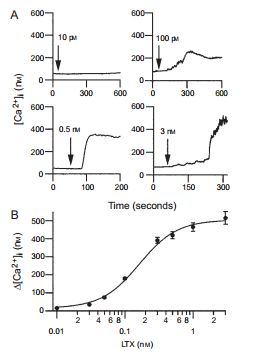 Figure 7. α-Latrotoxin Induces [Ca2+]i  Elevation in the Presence of Extracellular Ca2+ in β-Cells.A) Four examples of α-Latrotoxin (#LSP-130) effect on [Ca2+]i  at indicated toxin concentrations. [Ca2+]i  was assayed by the ratio of fura-2 fluorescence with alternating excitation at 340 and 380 nm. Note that as the concentration of α-Latrotoxin increases, so does the increment in [Ca2+]i. α-Latrotoxin was perfused throughout the experiment starting from the times indicated by arrows. B) Dose dependence of α-Latrotoxin’s effect on the [Ca2+]i increase (∆[Ca2+]i). Data were averaged from five to nine cells. The maximal effect of α-Latrotoxin is achieved at 3 nM.Adapted from reference 71 with permission of Blackwell Publishing Ltd. 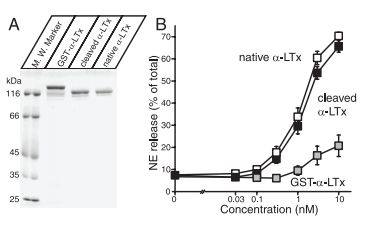 In PC-12 cells, many aspects of the need and function of proteins involved in the release machinery were investigated using α-Latrotoxin as a tool to activate secretion54,55,58,59. In pancreatic β-cells, the action of the toxin and its effect on different processes involved in hormone secretion was characterized70-73.