Neurotrophins (NTs) such as nerve growth factor (NGF) and brain-derived neurotrophic factor (BDNF) are essential for the development and maintenance of the nervous system. BDNF and NGF signal through two types of cell surface receptors: the high-affinity tropomyosin-related kinase (Trk) receptor B (TrkB), and receptor A (TrkA) respectively, and the low affinity receptor (p75NTR). Neurotrophins are synthesized as precursors (pro-neurotrophins, proNTs) that are proteolytically cleaved to mature neurotrophins. Pro-brain derived neurotrophic factor (proBDNF) and pro-nerve growth factor (proNGF) cleavage can occur either intracellularly by the action of furin or proconvertase, or extracellularly by the action of plasmin, matrix metalloproteinase MMP-7 or MMP-914. It is well appreciated that proNTs also have functions in their own right, because they elicit activities opposite to those of their mature counterparts13. Although mature NTs can stimulate neuronal survival, long term potentiation and synaptic strengthening, proNTs may induce apoptosis and long term depression17. Sortilin, one of five members of the mammalian VPS10p domain receptor family of neuronal type-1 receptors, is required for the death signaling pathway, because it forms a high affinity binding site together with the p75NTR neurotrophin receptor. Inhibiting binding of the growth factor pro-domains to sortilin prevents apoptosis by proNTs from occurring in cultured cells as well as in vivo following spinal cord injury18. Thus, neuronal survival/death depends on the release of mature NTs versus that of proNTs. Both mature NTs and proNTs are biologically active, with divergent roles that reflect differing receptor affinities: proNTs display higher affinities for p75NTR, whereas mature NTs have greater affinities for TrkB. Indeed, p75NTR, a death domain receptor, associated with Trk co-receptor enhances or suppress neurotrophin-mediated cell survival3.

As NGF and proNGF have different affinities for their receptors, and respectively lead to different cellular outcomes, mast cells were found to modify the microenvironment in human tissues in response to the identity of the neurotrophin. A recent work investigated whether the increase of NGF in mast cells is a result of the enzymatic activity of tryptase on proNGF14. Supernatants of peritubular cells and synthetic proNGF were treated with tryptase. Results of western blot studies using Anti-proNGF Antibody (#ANT-005) indicated enzymatic cleavage of proNGF by active tryptase (Figure 1). The results of this study show that human tryptase can cleave proNGF and that tryptase-secreting mast cells in the vicinity of proNGF/NGF-secreting cells in any human tissue are likely able to alter the ratios of proNGF/NGF. 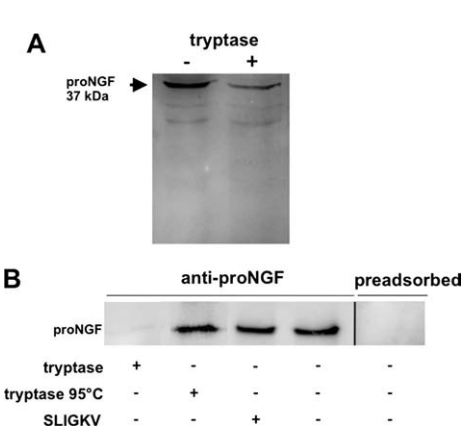 Figure 1. proNGF Cleavage by Tryptase.A. Western blot analysis of human testicular peritubular cell (HTPC) supernatants with and without tryptase treatment using Anti-proNGF Antibody (#ANT-005). B. Western blot analysis using Anti-proNGF Antibody. proNGF was treated with tryptase. A significant decrease in the proneurotrophin level was observed. No decrease was observed in heat inactivated tryptase or by the addition of SLIGKV.Adapted from ref. #14 with permission of The American Society for Biochemistry and Molecular Biology.

Another study on proNGF demonstrated that the pro-neurotrophin is produced and secreted by breast cancer cells, thereby stimulating their invasive properties6 . Interestingly, siRNA against proNGF caused a decrease in breast cancer cell invasion that was restored by the addition of Recombinant human proNGF (cleavage resistant) protein (#N-285). In addition, the proNGF invasive effect was prevented by inhibiting TrkA, a kinase-dead TrkA, or siRNA against TrkA and sortilin. These data reveal the existence of an autocrine loop stimulated by proNGF and mediated by TrkA and sortilin, for the stimulation of breast cancer cell invasion. In a different study, proBDNF induced colorectal cancer (CRC) cell apoptosis2. Immunocytochemical staining of SW480 cells (a colorectal cancer cell line) using

Anti-proBDNF Antibody (#ANT-006) demonstrated that proBDNF colocalizes with sortilin (Figure 2). The functional effect of exogenous Recombinant human proBDNF (cleavage resistant) protein (#B-256) was examined in four CRC cell lines maintained in serum- free medium. Apoptotic ratios significantly increased in all CRC lines when exposed to proBDNF. These findings suggest that proBDNF and the complex p75NTR/sortilin could counterbalance the mechanism involved in the control of CRC cell survival. 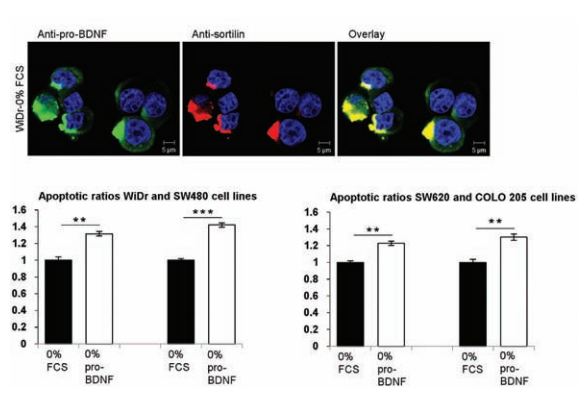 pro-Neurotrophins in the Nervous system

Seizures cause brain injury via a number of mechanisms, potentially contributing to neurologic and cognitive deficits in epilepsy patients. Although seizures induce neuronal death in some situations, they also can  produce nonlethal pathophysiologic effects on neuronal structures and functions19. Bilateral injections of Recombinant mouse proBDNF protein (#B-240) into hippocampal dentate gyrus significantly enhanced kindling in wild-type mice. These findings highlight the contribution of proBDNF to epileptogenesis11.

Another study investigated the role of proBDNF in the molecular mechanisms leading to synaptic simplification and neuronal apoptosis in human immunodeficiency virus type 1 (HIV-1)3. The HIV protein gp120 reduced the length of neuronal processes similarly to proBDNF. Intriguingly, the effects of both proBDNF (Mut-human) and gp120 were blocked by inhibitors of p75NTR, suggesting that proBDNF and gp120 share a similar mechanism of neurotoxicity. Using rat primary neurons, it was observed that gp120 promotes a time-dependent intracellular and extracellular accumulation of proBDNF as shown using Anti-proBDNF Antibody. These data suggest that HIV, through gp120, reduces proBDNF processing, therefore causes an altered balance between antiapoptotic and proapoptotic neurotrophins.

Spinal cord injury (SCI) causes permanent neurological disability by inducing massive cell death. Following a SCI event the increased levels of proNGF play a pivotal role in the apoptosis of oligodentrocytes in a p75NTR-dependent manner4. A recent work demonstrated the therapeutic efficacy of acupuncture leading to a partial functional recovery in an animal model of spinal cord injury (SCI)5. Acupuncture reduced apoptotic cell death of both neurons and oligodendrocytes and improved functional recovery after SCI. Acupuncture decreased expression of proNGF in microglia as shown in western blot analysis using Anti-proNGF Antibody. proNGF is involved in apoptotic cell death of neurons and oligodendrocytes following SCI. In a different study, the same group showed that Ghrelin (a 28-amino acid gastric hormone) inhibited proNGF expression following SCI, shown in western blot of mouse spinal cord lysates using Anti-proNGF Antibody8. The study showed that ghrelin treatment after SCI also inhibited the activation of p38 MAP Kinase (p38 MAPK). These findings suggest that the antiapoptotic effect of ghrelin on oligodendrocytes may be mediated in part by decreasing proNGF production via inhibition of p38 MAPK in microglia after injury.

Another work investigated proNGF expression in chronic constriction injury (CCI) to the rat sciatic nerve12. Following application of the traditional CCI model of neuropathic pain, mast cells followed by keratinocytes and vascular endothelium upregulated proNGF, up to four weeks post-injury, as confirmed by Western blot analysis using Alomone Labs Anti-proNGF Antibody. This is in contrast to the relative changes in TrkA protein levels and p75NTR in the same area. These data suggest that the sprouting after lesion of NGF-responsive fibers is initiated by the increase in local proNGF levels.

Several studies investigated the relationship between proNGF and cell death induced during pathogenesis of Alzheimer Disease (AD)16. Yan-Jiang Wang et al. investigated the effect of proNGF on neuron death, neurite growth and Aβ production, in vitro and in vivo15. The study showed that exposing cells to Recombinant human proNGF (cleavage resistant) protein promoted the death of different cell lines and primary neurons in culture. It was found that proNGF is the predominant form of NGF in the brain and is increased in AD, suggesting that proNGF has significant functional roles in AD. These results suggest that the neurite degeneration that occurs in AD could be a result of proNGF, and that proNGF might be a critical factor involved in the pathogenesis of AD.

A recent study investigated the role of proBDNF and proNGF on branching of retinal axons10. Retinotectal map formation develops via topographically specific guidance and branching of retinal axons in their target area. This process is controlled, in part, by reverse signaling of ephrinA molecules expressed on retinal axons. EphrinAs are glycosylphosphatidylinositol-anchored molecules, thus require transmembrane co-receptors to exert this function such as p75NTR and TrkB9. Experiments were performed in the presence of 5 ng/ml BDNF to provide a substantial level of axon branching. Co-application of 5 ng/ml proBDNF (WT-human) resulted in down-regulation of axon branching, in that it effectively neutralized the branch-promoting effect of BDNF. This downregulation was mediated by p75NTR as it was no longer observed after knock-down of this receptor. A similar reduction in branching was observed when using proNGF (purchased from Alomone Labs). This indicates that topographic branching is controlled by local control of processing of proneurotrophins10.