During the last few years there has been an increased focus on ion channel-related research in tissues and cells other than the nervous system. Every cell in the body expresses several kinds of ion channels that perform various (and sometimes essential) physiological functions. This broadening of ion channel research entails the use of novel reagents and techniques to study ion channels in tissues such as the immune system or epithelial tissue. Understanding the changing needs of the research community, Alomone Labs has developed a novel series of specific antibodies directed against extracellular ion channels epitopes, thus allowing the close scrutiny of ion channel expression in living cells. The use of these novel reagents are demonstrated by the following experiments.

Ion channel function can be regulated by several factors that include binding to other proteins and/or auxiliary β subunits, biochemical modifications such as phosphorylation and increasingly, the regulation of ion channel by trafficking within the cell. The importance of trafficking regulation at the physiological level is demonstrated by the finding that several channelopathies (diseases caused by ion channel malfunction) are caused by mutations that affect ion channel trafficking. Examples include mutations in the cystic fibrosis transmembrane regulator (CFTR) channel that causes cystic fibrosis, in the voltage-gated Na+ channel Nav1.5 that causes LQT3 type cardiac arrhythmias and in the voltage-gated K+ channel Kv11.1 (HERG) that causes LQT2 type cardiac arrhythmias1-3.

The following experiment (see Figure 1) demonstrates the use of a new anti-KV11.1 (KCNH2) antibody that recognizes an extracellular epitope of the channel. Human embryonic kidney (HEK) cells were transfected with the native KV11.1 channel.

(A) Transfection was confirmed by staining the fixed and permeabilized cells with an Anti-KCNH2 (HERG) Antibody (#APC-062) that recognizes an epitope situated at the cyoplasmic C-terminal end of the channel. The antibody was visualized with a goat-anti-rabbit Alexa-555 secondary antibody. Note that almost all cells are positively stained. White arrows indicate cells that do not express the KV11.1 channel.

(B) Staining of live intact HEK-KV11.1 cells with the new Anti-KCNH2 (HERG) (extracellular) Antibody (#APC-109). About half of the cells show little (yellow arrows) or no staining (white arrows) while others have strong staining, indicating that surface expression of the channel does not fully correlate with total cell channel expression (as seen in (A)). This result may suggest that surface channel expression may vary over time perhaps in accordance with the cell cycle. 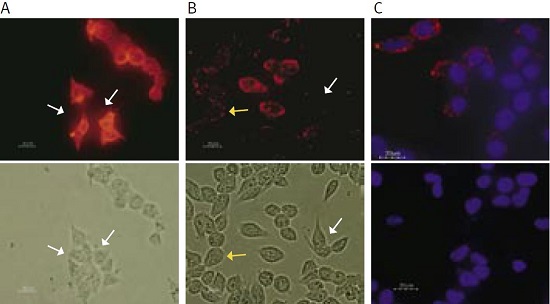 One of the most studied K+ channels in relation to the regulation of cell proliferation is the voltage-gated K+channel KV1.3. The channel is the dominant K+ channel in resting T-lymphocytes. It is well established that activation of T-lymphocytes (the process that enables the cells both to proliferate and become immune response effectors) induces an up-regulation of surface KV1.3 channels5.

The following example (see Figure 2) shows the use of an Anti-KV1.3 (KCNA3) Antibody designed to recognize an extracellular channel epitope. Detailed analysis of the specificity of this antibody is shown on the right.

For the experiment shown in Figure 2, human Jurkat cells (a T cell leukemia line) were treated with 1μg/ml phytohemagglutinin A (PHA) for 24 hours. Surface expression of the KV1.3 channel in parallel with cell cycle progression was studied using an Anti-KV1.3 (KCNA3) (extracellular) Antibody directly labeled with the fluorophore FITC (#APC-101-F) and analyzed in a flow cytometer. DNA content was visualized with propidium iodide. Treatment with PHA induced an increase in cell surface expression of the KV1.3 channel (A). Control cells are shown in black, treated cells in green. When analyzed in the context of the cell cycle (B and C) it is apparent that treated cells in both the G1 (green oval) and the S-G2 (blue oval) phase, upregulated the expression of the KV1.3 channel. Note that in the treated cells there is an increase in apoptotic cells (orange oval) that are brightly stained with the Anti-KV1.3 (KCNA3) Antibody. This staining however could be due to unspecific binding of the antibody to the broken apoptotic cells. 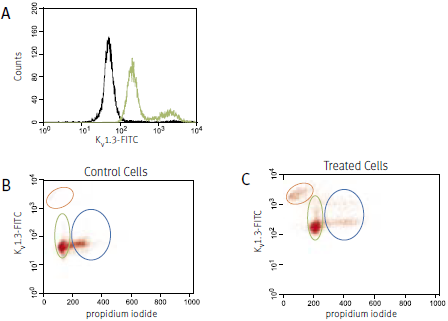 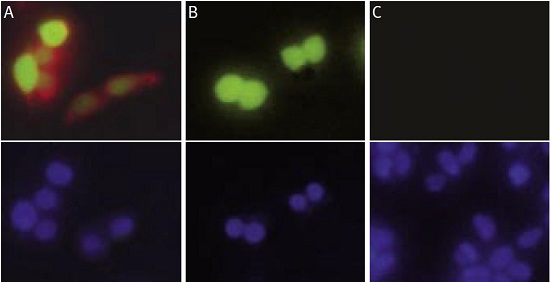 The greatest advantage in the use of antibodies directly labeled with fluorophores is that it enables the usage of several antibodies directed against different proteins simultaneously and effortlessly. Simultaneous use of different antibodies against various targets permits tracking of the changes in cell surface expression of a particular target within a cell subpopulation that is determined by another surface marker, among other potential uses. To demonstrate this, the well-known model of phorbol 12-myristate 13-acetate (PMA)-induced differentiation of the human erythroleukemic cell line K562 was used6. K562 cells are considered pluripotent cells that can be induced in vitro to differentiate into the monocytic, erythroid or megakaryocytic cell lineages using a variety of differentiation-inducing agents. Treatment of K562 cells with PMA pushes the cells to differentiate along the megakaryocytic lineage and induces upregulation of markers associated with the megakaryocytic lineage as well as changes in cell morphology, adhesive properties and growth arrest6,7.

In the example (see Figure 3), K562 cells were treated for 4 days with 10nM PMA (#P-800). After that the cells were washed and simultaneously stained with anti-CD61 (a known marker of megakaryocytes) conjugated to phycoerythrin and with Anti-KCNH2 (HERG) (extracellular) or Anti-P2X7 Receptor (extracellular), both conjugated to FITC (#APC-109-F and #APR-008-F, respectively) and analysed in a flow cytometer.

As expected, control untreated K562 cells showed no expression of CD61, while PMA-treated cells show considerable staining (A). Control cells are shown in black, treated cells in green. In (B) double staining with anti-CD61 and Anti-P2X7 is shown. While in the control cells some staining of surface P2X7 can be seen, the staining was greatly enhanced in differentiated cells. Virtually all cells that are positive to CD61 are also stained with the Anti-P2X7 Antibody (see upper right panel in the lower figure). Figure (C) shows double labeling with anti-CD61 and Anti-KCNH2 (HERG) Antibody in untreated and PMA-treated cells. As in (B), staining of KV11.1 was greatly enhanced in treated cells and most CD61-positive cells were also positive for KV11.1. Notice, though, that a small CD61 subset was negative for KV11.1 (see upper left panel in the lower figure). 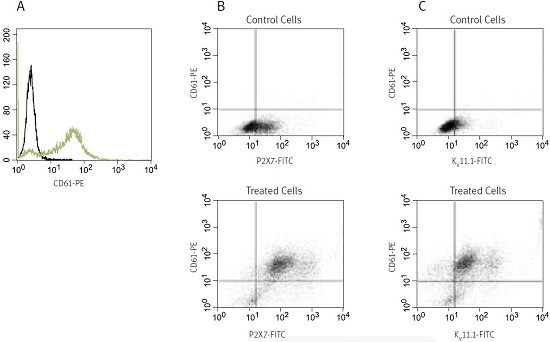