A Potent Blocker of KCa and KV1 K+ Channels

Maurotoxin (MTX) is a 34 amino acid long toxin, isolated from the venom of the scorpion Scorpio Maurus palmatus, and is classified as α-KTx6.2 scorpion toxin family, having four disulfide bridges1,2.

MTX activity was extensively assayed on a large array of K+ channels, including KCa (KCa1.1, KCa2.1, KCa2.2, KCa3.1), KV1 (KV1.1, KV1.2 and KV1.3) and Shaker-B K+ currents. MTX inhibits the binding of 125I-Apamin and 125I-Kaliotoxin to rat brain synaptosomal membranes with an IC50 of 5 nM and 30 pM, respectively3. Furthermore, MTX blocks KCNA1 (KV1.1), KCNA2 (KV1.2) and KCNA3 (KV1.3) expressed in Xenopus oocyes with an IC50 of 45 nM, 0.8 nM, and 180 nM, respectively3. Maurotoxin blocks Shaker-B K+ current with an IC50 of 2 nM4. In contrast to previous reports, MTX was recently shown to have no effect on KCa1.1, KCa2.1 and KCa2.2 small conductance KCa channels up to 300 nM in physiologically relevant ionic strength buffers, but rather produces a high and specific block towards KCa3.1 (IKca1, SK4) and KCNA2 (KV1.2) with IC50 of 1 nM and 0.1 nM, respectively5. Furthermore, MTX was shown to block Gardos channel in human red blood cells and to inhibit the KCa in activated human T-lymphocytes without affecting the voltage-gated K+ current encoded by KCNA35. Moreover, MTX inhibition was shown to be pH-dependent6,7.

In conclusion, Maurotoxin seems to be a very potent blocker of both KCa3.1 and KV1.2 channels. 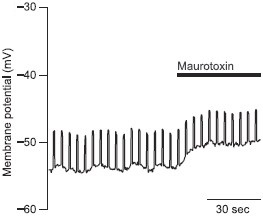