A Potent Blocker of ASIC1a Channels

Native Psalmotoxin1 (PcTx1) is a 40-amino acid toxin originally isolated from the venom of the South American tarantula Psalmopoeus cambridgei.1

PcTX1 is characterized by the unusual quadruplet Lys25-Arg26-Arg27-Arg28, which probably forms a strongly positive "patch" at the surface of the toxin molecule, constituting an area that is a strong candidate for channel binding site recognition. The molecular scaffold of PcTX1 is likely to be similar to that previously described for both cone snail and spider toxins5,6 and comprises a triple-stranded antiparallel β-sheet structure reticulated by three disulfide bridges.1

PcTx1 potently (IC50 = 0.9 nM) and specifically blocks a particular subclass of H+-gated cation channels, the Acid-sensing ion channels 1a (ASIC1a) and is able to discriminate between the two splice variant subtypes and not block the ASIC1b channel (which differs only in its N-terminal sequence). Moreover, PcTX1 loses its capacity to block ASIC1a as soon as this subunit is associated with another member of the family (ASIC2a or ASIC3).1

The ASICs are abundant in the brain and spinal cord neurons and are implicated in pain sensation, ischemic stroke mechanosensation, learning and memory.2,3 In acute and neuropathic pain models, specific blockage of ASIC1a with PcTx1 results in analgesic effects working upstream of the opiate receptors.4

Using an iodinated form of the toxin, the binding for the PcTX1 site identifies at the cysteine-rich domains I and II (CRDI and CRDII) of the extracellular loop of ASIC1a. A disulphide bridge between domains 1 and 4 of the channel supports a close relationship between the CRDI4–CRDII domain, where PcTx1 acts, and the post-M1 region, the binding site for the proton.7 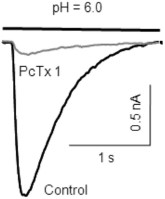 Alomone Labs Psalmotoxin-1 inhibits ASIC1a in mouse MNTB neurons.IASICs in mouse neurons of the medial nucleus of the trapezoid body (MNTB) were activated by a drop in pH from 7.3 to 6.0. Application of 10 nM Psalmotoxin-1 (#STP-200) almost abolished IASICs suggesting that ASIC1a homomers make up the majority of IASICs in MNTBs.Adapted from Gonzalez-Inchauspe, C. et al. (2017) J. Neurosci. 37, 2589. with permission of the Society for Neuroscience.