The canonical transient receptor potential channels (TRPCs) are non-selective cation channels that are expressed in a variety of multicellular organisms with different functions. The TRPC family can be divided by homology and function into four subfamilies: TRPC1, TRPC2 (a pseudogene in human), TRPC4/5 and TRPC3/6/7. They can form either homo- or heteromeric channels with individual properties. This brief report aims at summarizing advances made regarding this subfamily of TRP channels and mainly how Alomone Labs’ products have influenced the progress made.

TRPC1, the first channel to be uncovered in this family may be involved in Duchenne muscular dystrophy (DMD)1. Using the animal model of the disease, Gervàsio et al. demonstrated that muscle tissues have increased protein levels of TRPC1 using Alomone Labs’ Anti-TRPC1 antibody (#ACC-010) (Figure 1), which may reflect higher levels of intracellular Ca2+ when compared to their wild type counterpart. To provide further evidence that TRPC1 participates in the pathophysiology of Duchenne, the authors show that TRPC1 colocalizes and binds to caveolin-3 on the plasma membrane of muscle cells using Anti-TRPC1 antibody (Figure 2) and go on to show that Src kinase may be responsible for triggering TRPC1 dependent Ca2+ uptake1.

Figure 1. Levels of TRPC1, Src and Caveolin-3 are Increased in Muscle Tissues of Duchenne Muscular Dystrophy Mouse Model (mdx).Membranes of tibialis anterior (TA) muscle were probed for TRPC1 using Anti-TRPC1 antibody (#ACC-010).Adapted from reference 1 with permission of The Company of Biologists. 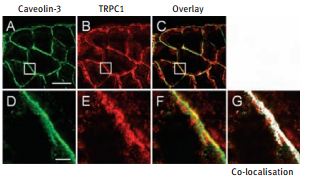 Figure 2. TRPC1 Colocalizes With Caveolin-3.Cryosections from TA were doubly labeled for caveolin-3 (A and D) and TRPC1 (B and E) using Anti-TRPC1 antibody (#ACC-010). Overlapping the labeled sections shows that TRPC1 and caveolin-3 are colocalized (C, F and G).Adapted from reference 1 with permission of The Company of Biologists.

TRPCs have for long been assigned to being essential components of store-operated calcium entry (SOCE) since this mode of intracellular calcium increase is positively mediated by IP3 and since TRPCs were also found to bind IP32,3. This speculation has been and still is quite controversial. Jardin et al. take this notion one step further and show in Figure 3 that in human platelet cells, Orai1 and TRPC1 can be co-immunoprecipitated upon extensive depletion of intracellular Ca2+ stores which activates SOCE (using Anti-TRPC1 antibody for immunoprecipitating and/or immunodetecting TRPC1)4.

Figure 3. TRPC1 and Orai1 Co-Immunoprecipitate in Human Platelets.Human platelets were suspended in Ca2+ free medium and then stimulated with thapsigargin combined with ionomycin (A) or thrombin (B) and lysed. Cell lysates were immunoprecipitated with Anti-TRPC1 (#ACC-010) and blotted with Orai1 antibody (A) or immunoprecipitated with anti-Orai1 antibody and blotted with Anti-TRPC1 (B).Adapted from reference 4 with permission of The American Society for Biochemistry & Molecular Biology.

TRPC3, an additional member of the TRP channels family is expressed in both excitable and nonexcitable cells. Roedding et al. were interested in studying its expression pattern in the brain as a function of age5. They subsequently used postmortem prefrontal cortex and cerebellum from subjects ranging from ages of 8 days to 83 years and monitored the expression of TRPC3 in the two different areas of the brain (using the Anti-TRPC3 antibody (#ACC-016)). Representative western blots of TRPC3 protein in the prefrontal cortex (FCX) or in the cerebellum (CBM) are presented in Figure 4. Quantitative studies of TRPC3 levels indicate that TRPC3 expression in the prefrontal cortex are higher in the neonates/infants age group than in the adolescent to adult age group (Figure 5a) suggesting that TRPC3 may be developmentally regulated in that area of the brain. On the other hand, TRPC3 expression in the cerebellum was similar throughout the age groups (Figure 5b) suggesting that TRPC3 may have a physiological role in the cerebellum throughout the lifespan.

Figure 4. TRPC3 is Detected in Human Prefrontal Cortex and Cerebellum.A) Human cerebellar tissue was obtained and TRPC3 expression was detected in the prefrontal cortex and the cerebellum using Anti-TRPC3 antibody (#ACC-016). B) Pre-incubation with the peptide immunogen competed out the TRPC3 immunoreactive bands.Adapted from reference 5 with permission of Elsevier. 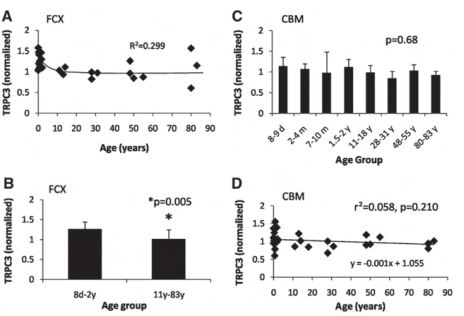 Figure 5. TRPC3 is Expressed in Human Prefrontal Cortex and Cerebellum Throughout all Age Groups.A) and B) Prefrontal cortex of neonates/infants show higher expression of TRPC3 (using Anti-TRPC3 antibody (#ACC-016)) compared to adolescent/adults. C) and D) TRPC3 levels remain constant throughout the age groups in the cerebellum.Adapted from reference 5 with permission of Elsevier.

As TRPC3 shares 75% homology with TRPC6 and TRPC3 could compensate for the loss of TRPC6 in trpc6-/-mice6 and since TRPC6 promotes proliferation of prostate cancer epithelial cells7, Yang et al. investigated whether TRPC3 plays a role in cellular proliferation in human ovarian cancer8. Indeed, using Alomone Labs’ Anti-TRPC3 antibody, they found that TRPC3 is highly expressed in these tumors (Figure 6). Knocking-down the expression of TRPC3 using siRNAs targeted against specific regions of TRPC3 in ovarian cancer cell lines (protein levels were subsequently verified by western blot using Anti-TRPC3 antibody), cell growth and tumor development were suppressed in cell lines and in nude mice respectively. These data strongly suggest that TRPC3 may play a role in the development and progression of human epithelial ovarian cancer.

In human coronary artery endothelial cells (HCAECs), ATP is released in to the extracellular milieu (and known to exert a strong proinflammatory effect) in response to ischemia, hypoxia, mechanical or chemical stress and induces the expression of VCAM-1 (vascular cell adhesion molecule 1) which leads to increased cellular Ca2+levels. It has been shown that HCAECs express all members of TRPCs, and that TRPC3 contributes to ATP-stimulated Ca2+ influx9. These studies are reinforced by Alvarez et al. which measured a significant decrease in the elicited current induced by ATP in rat ventricular cardiomyocytes under whole cell patch clamp when Anti-TRPC3 antibody is added to the pipette solution (Figure 7)10. Recently, Smedlund et al. showed that TRPC3 contributes to the actions of ATP on VCAM-1 using in part Anti-TRPC3 antibody to monitor TRPC3 expression in HCAECs as well as to verify TRPC3 protein levels followed by siRNA treatment11. These findings underscore a potential novel function of TRPC3 within the context of development and progression of atherosclerotic lesions in coronary artery diseases. The authors also use Anti-TRPC1 antibody (#ACC-010), Anti-TRPC4 antibody (#ACC-018), Anti-TRPC5 antibody (#ACC-020) and Anti-TRPC6 antibody (#ACC-017) to show that TRPC channels are expressed to certain degrees on the surface of HCAECs11. 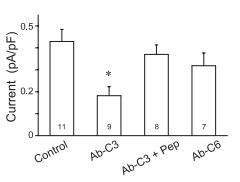 Recently, a role in maintaining high intracellular Ca2+ levels in the myometrium (the smooth muscle of the uterine wall) during labor contractions was attributed to TRPC412. shRNA was used in order to reduce the expression of TRPC4 (while expression of TRPC4 was verified by western blot using the Anti-TRPC4 antibody), and following various treatments known to increase intracellular Ca2+ concentrations through extracellular Ca2+ entry such as oxytocin (GPCR-stimulated), thapsigargin (store depletion-stimulated) and OAG (DAGstimulated) found that Ca2+ entry through TRPC4 is stimulated by GPCR12.

Calcium plays an important role in axon outgrowth and growth cone motility. Currents involving Ca2+ are significantly linked to axon formation. In addition, TRPC channels have been found implicated in Ca2+ -dependent growth cones dynamics13. In a recent paper, using rat embryonic hippocampal neurons, Davare et al. show that TRPC5 channels activate CaMKK/CaMKIγ in a Ca2+-dependent manner to induce axon formation14. They show this elegantly and do so by using different approaches. One such approach was using siRNA to specifically knockdown TRPC5 and observing the effect on axon formation. In the first stage of the experiment, the authors verified that protein levels of TRPC5 are decreased upon siRNA treatment by staining electroporated cells with Anti-TRPC5 antibody and comparing the intensity between siTRPC5 treated and control siRNA treated cells (Figure 8A). The decrease in protein levels was indeed sufficient to significantly affect axon formation but downregulation of TRPC6 by siTRPC6 had no effect, reflected by the anti-Tau-1 staining in neurons (Figure 8B)14. 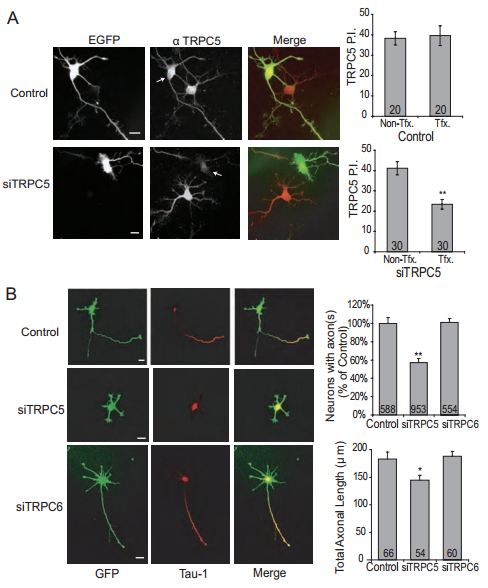 Boisseau et al. initiated a study in order to gain some insight about the tissue distribution of TRPCs16. The distribution of TRPC1, TRPC3 and TRPC6 throughout the cortical wall was studied using immunohistochemistry. The data indicate that TRPC1 is specifically found in the preplate located under the pial surface, using Alomone Labs’ Anti-TRPC1 antibody. Unlike TRPC1, both TRPC3 and TRPC6 were widely distributed throughout the cortical wall (using Anti-TRPC3 and Anti-TRPC6 antibodies). Furthermore, both channels were expressed by the same cortical cells.

Angiogenesis is important for development, tumor growth and metastasis. VEGF (vascular endothelial growth factor) plays a critical role in this process. Therefore, inhibiting the signaling pathway of VEGF has become an important objective in anticancer treatment. In the signaling of VEGF, an intracellular increase in Ca2+ takes place through an intracellular Ca2+ release and extracellular Ca2+ entry. TRPC6 is responsible for the extracellular entry of Ca2+ in human umbilical vein endothelial cells (HUVECs)17. Indeed, inhibition of TRPC6 by siRNA or by expression of a dominant negative form of the protein (protein levels subsequently verified by western blot analysis using Anti-TRPC6 antibody) suppressed HUVEC proliferation just as inhibition of the channel with a pharmacological inhibitor did. These data suggest that TRPC6 plays an important role for VEGF-induced angiogenesis and may be a target for potential cancer treatment17. 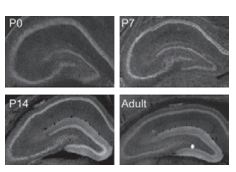 Figure 9. Expression Pattern of TRPC6 in Hippocampal Development.Immunohistochemical analysis of rat hippocampi at the indicated ages using Anti-TRPC6 antibody (#ACC-017).Adapted from reference 15 with permission of The Company of Biologists.