Putting Pressure on the Angiotensin Receptors

Angiotensins are a family of peptides that are critical players in the control of water and electrolyte balance. Angiotensins mediate their actions via several specific G-protein coupled receptors: AT1, AT2 and MAS receptors. Alomone Labs offers a variety of antibodies targeted against these receptors, which are important tools responsible for advancing research in this field. Here, we briefly describe the significant roles and activities of these receptors and their involvement in some cardiovascular and renal diseases.

The Renin-Angiotensin System (RAS) or the Renin-Angiotensin-Aldosterone System (RAAS) is a hormonal system that regulates blood presure and water balance and is mainly activated upon loss of blood volume or a drop in blood pressure3. Angiotensin (Ang) was discovered in the late 1930s and is a key factor in the RAAS system. This hormone is a derivative of a precursor molecule – angiotensinogen, a 452 amino acid protein, a member of the serpin family, produced as α-2-globulin in the liver. Angiotensinogen is a substrate of the enzyme Renin in the kidney to produce a deca peptide – Ang I that appears to have no biological activity. Ang I is converted to Ang II by Angiotensin-Converting Enzyme (ACE) and this product is the active hormone, which mediates and controls most of the RAAS system effects3,17. Ang II is also a precursor for some peptides including the heptapeptide active hormone Angiotensin (1-7) (Ang-(1-7))24.

The biological effects mediated by Ang II are diverse, widespread, and play a critical role in the regulation of the renal and cardiovascular systems, and some activities in the central nervous systems. Circulating levels of Ang II was identified to control blood pressure based on the regulation of salt and water metabolism, vascular smooth muscle cell (VSMC) tone, thirst and sympathetic system outflow. Ang II is well known to cause potent increases in systemic and local blood pressure via its vasoconstrictive effect, to influence renal tubules, to retain Na+ and water by activating Na+/H+ exchangers, and by stimulating aldosterone release from the adrenal gland11.

Although Ang II was originally discovered as a potent vasoconstrictor, research in the past several decades has provided ample evidence that Ang II modulates cell growth depending on the cell type, subtype of Ang II receptor, and the presence of other hormones, growth factors, and cytokines7. Ang II may either stimulate growth (proliferation, hypertrophy) or act as a growth suppressor (apoptosis, antiproliferation with induction of differentiation). Morever, Ang II encourages cell growth in various diseases such as atherosclerosis, vasculitis, hypertension-induced injury, cardiac hypertrophy, compensatory renal hypertrophy, and nephritis7,11.

With more than two Ang II receptor subtypes, Ang II receptors type 1 and 2 (AT1 and AT2, respectively) were initially discovered by a pharmacological approach using various specific Ang II Receptor pharmacological blockers5. These drugs antagonize Ang II-induced biological actions, including smooth-muscle contraction, sympathetic pressure mechanisms, and aldosterone release. This paradigm was primarily confirmed by the cloning of AT1 receptor15,18 and AT2 receptor14. These findings enabled the understanding of the structure and the function of these receptors. Other poorly characterized subtypes of AT receptor are AT3 and AT4receptors. The AT4 receptor is activated by the Ang II metabolite Ang IV and may play a role in regulating the CNS extracellular matrix formation7. All Ang II receptors have seven transmembrane domains and belong to the superfamily of G-protein coupled receptors (GPCRs).

Most of the well-known Ang II effects such as blood pressure elevation, vasoconstriction, increase in cardiac contractility, aldosterone release from the adrenal gland and consequently renal Na+ and water absorption, and facilitation of catecholamine release from nerve endings21, drinking response and cell proliferation are mediated through the AT1 receptor. In rat, AT1a and AT1b share 94% homology and have similar pharmacological properties and tissue distribution patterns21. AT1 receptor subtypes are ubiquitously and abundantly distributed in adult tissues, including blood vessel, heart, kidney, adrenal gland, liver, brain, and lung7.

Although the AT1 receptor has been reported to interact with several G-proteins, its major physiological functions are expressed through Gq/11-mediated activation. In cardiac fibroblast, AT1 receptor is coupled to a Giprotein in contrast to AT1 receptor in cardiac myocytes which couples Gq. Consequently, the downstream signaling differs significantly between these two cell types: In rat cardiac fibroblasts, AT1 receptor induces ERK tyrosine phosphorylation and cell proliferation. This signaling is also relevant for the expression of collagen and fibronectin during ventricular hypertrophy7. In rat cardiac cells, AT1 receptor induces the activation of phospholipase C β isoforms, and consequently Ca2+ release from intracellular stores, thereby inhibiting adenylate cyclase and activating Ca2+ influx7,21.

Many in vitro and in vivo studies support the notion that Ang II activities (mediated by AT1 receptor) participate directly in the pathogenesis of various cardiovascular diseases such as left ventricular hypertrophy and renal diseases. Numerous selective and potent nonpeptide AT1 receptor antagonists have been developed, of which several have been in use clinically for the treatment of hypertension4,6.

Due to the central role of AT1 in vasoconstriction, AT1 receptor antagonists (Type 1 blockers) are effective for the treatment of essential hypertension, by lowering arterial pressure without causing reflex tachycardia. In patients with heart failure AT1 receptor blockers decrease left ventricular filling pressures and pulmonary arterial pressures and improve cardiac output6,12. Also, these blockers have beneficial effects in delaying the onset and the progression of renal disease and diabetic associated hypertension22.

AT2 receptor is ubiquitously expressed in developing fetal tissues and declines drastically in adult6. The expression of the AT2 receptor was shown to be dependent on growth factors or growth states23. In mouse 3T3 cells, AT2 mRNA is expressed when growth is arrested at the confluent state and is decreased in the vigorous growth phase, suggesting a possible role for this receptor in the developing fetus and organ morphogenesis7. On the other hand, experiments in AT2 knockout mice do not demonstrate any significant effect on the fetus10. In the adult, expression of this receptor is limited mainly to the uterus, ovary, certain brain nuclei, heart, adrenal medulla and its expression is very low in the cardiovascular system. Unlike the AT1 receptor there is no evidence for subtypes of the AT2 receptor23.

In contrast to AT1, the AT2 receptor couples to the Gi protein. In various cell lines and vascular smooth muscle cells, AT2 receptor-activated protein tyrosine phosphatase was shown to inhibit cell growth and induce differentiation or apoptosis6. AT2 receptor was also shown to negatively modulate ERK giving rise to the similar cellular outcomes13.

However, there have been conflicting findings regarding these receptors. in vivo studies indicate that the stimulation of the AT2 receptor increases renal medullary and cortical interstitial cGMP by a bradykinin-dependent mechanism and elevates prostaglandin production, suggesting an important role in renal function, including vasodilatation and blood pressure regulation6. In addition, in mice lacking the AT2 receptor, the drinking response is impaired and locomotion is reduced, and the animals exhibit an increase in vasopressor response to Ang II13. 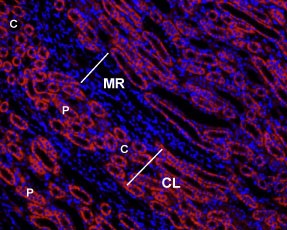 Expression of Angiotensin II Receptor Type-1 in Rat Kidney.Immunohistochemical staining of rat kidney paraffinembedded sections using Anti-Angiotensin II Receptor Type-1 (extracellular)-ATTO Fluor-550 antibody (#AAR-011-AO), (1:50), (red). Staining is specific to the most inner layer of the cortex. Intense staining is present in proximal tubes (P) but not in collecting ducts (C) in the cortical labyrinths (CL). No staining is present both in thin portions of the Loop of Henle or in the collecting ducts in the medullar rays (MR). Nuclei are visualized with Hoechst 33342 (blue).Experimental procedure and figure processed at Alomone Labs. 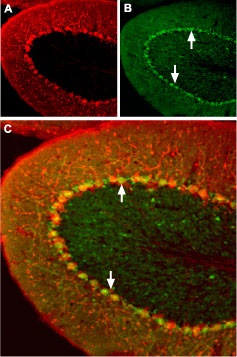 The angiotensin (1-7) Mas receptor was recently identified as a receptor for the biologically active heptapeptide Ang (1-7). This peptide is a metabolite of Ang II produced by ACE2 and its production is directly dependent on Ang II availability1,17,24.

Considerable interest in Ang-(1-7) and its receptor have been aroused since it became apparent that it can counter balance most of Ang II effects. Thus Ang (1-7) has antidiuretic, vasodilator, and hypotensive effects as well as antiarrhythmic and cardioprotective roles8. In addition, activation of Ang-(1-7) Mas receptor reduces vascular growth in vitro and in vivo9, inhibits cardiac myocyte growth and mediates inhibition of serum-stimulated MAPK activation in these cells. Moreover, this receptor plays a role in adjusting learning and memory in the brain20.

Ang-(1-7) Mas receptor was originally described as a proto-oncogene. Evidence indicates that the receptor is coupled to a Gq/11 protein that activates phospholipase C16. It is expressed in several organs including heart, kidney, blood vessels, testis and brain. An intense expression of this receptor was demonstrated in rat heart, and this level of expression is increased in myocytes surrounding the myopathic ischemic zone2,8. 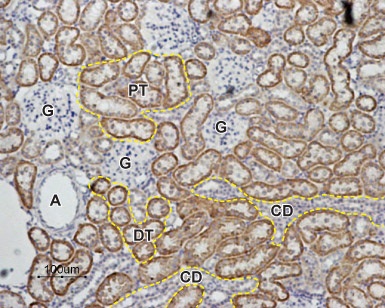