Aquaporin 4 (AQP-4) belongs to a family of membrane proteins that allow passage of water and certain solutes through biological membranes. The family is composed of 13 members (AQP-0 to AQP-12).

The aquaporins can be divided into two functional groups based on their permeability characteristics: the aquaporins that are only permeated by water and the aquaglyceroporins that are permeated by water and other small solutes such as glycerol. AQP-4 together with AQP-1, AQP-2 and AQP-5 belong to the first group1. Little is known about the function of the two newest members, AQP-11 and AQP-12.

AQP-4 is the major membrane water channel in the central nervous system. The channel is expressed in astrocyte foot processes in direct contact with capillary vessels in the brain suggesting a role in water transport under normal and pathological conditions. Indeed, transgenic mice lacking AQP-4 have reduced brain swelling and improved neurological outcome following water intoxication and focal cerebral ischemia. In contrast, brain swelling and clinical outcome are worse in AQP-4-null mice in models of vasogenic (fluid leak) edema caused by freeze-injury and brain tumor, probably due to impaired AQP-4-dependent brain water clearance2.

In addition, it has been recently shown that neuromyelitis optica (NMO), an inflammatory demyelinating disease that selectively affects optic nerves and spinal cord, is caused by the development of an autoantibody directed against AQP-43. 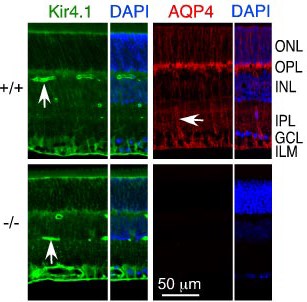 Alomone Labs is pleased to offer a highly specific antibody directed against an epitope located at the intracellular C-terminal domain of rat AQP4. Anti-Aquaporin 4 (AQP4) (249-323) Antibody (#AQP-004) can be used in western blot, immunocytochemical, immunohistochemical and indirect flow cytometry applications. It recognizes the Aquaporin 4 channel from rat, mouse and human samples.