Live or Let Die in Neuroscience: The Story of the Proneurotrophins

Although it has been more than forty years since the neurotrophins were first discovered we are only now starting to appreciate the complexity of their true nature. These compounds lead a fascinating double life: as the proneurotrophin they bind to p75NTR and sortilin to set in motion diverse signaling pathways, which may lead to either apoptosis or cell survival, whereas in their incarnation as mature neurotrophins they bind to Trk and p75NTR receptors and insure cell survival.

The neurotrophins are a family of soluble, basic growth factors which regulate neuronal development, maintenance, survival and death in the CNS and the PNS1. They include nerve growth factor (NGF), the first member of the family to be discovered2, brain derived growth factor3 (BDNF), neurotrophin-3 (NT-3) and neurotrophin-4 (NT-4)4. Their molecular weights are 13-15 kDa, having isoelectric points between 9 and 10. All of the neurotrophins form noncovalently linked homodimers in solution, with three intrachain disulfide bonds5. They bind to two types of receptors: each neurotrophin binds to a specific tyrosine kinase (Trk) receptor (NGF to TrkA, BDNF and NT4 to TrkB and NT3 to TrkC)6, and all neurotrophins bind to the p75 neurotrophin receptor (p75NTR) receptor7. The residuesinvolved in binding of neurotrophin to Trk receptors are different than those involved in binding to p75NTR.

Binding of a neurotrophin to its specific Trk receptor activates its tyrosine kinase, leading to the activation of PI3K (phosphatidylinositol-3-kinase), MAPK (mitogen activated protein kinase), and phospholipase C-γ pathways. Activation of these pathways leads to cell survival, differentiation, neurite growth, and activity dependent plasticity8. However, binding of neurotrophin to the p75NTR receptor leads to the activation of different pathways. p75NTR lacks an intrinsic catalytic activity, so its signaling is mediated by interaction with various cytoplasmic interactors. NADE (p75NTR NTR-associated cell death executor), NRIF (neurotrophin receptor-interacting factor) and NRAGE (neurotrophin receptor interacting MAGE homolog) are involved in the induction of cell death. NRIF, NRAGE and Schwann cell factor-1(SC-1) are involved in cell cycle arrest. The GTPase RhoA modulates neurite outgrowth. The activation of the NF-κB pathway mediates cell survival8. Thus binding to p75NTR can either result in cell survival or cell death, depending on the particular cytoplasmic factor that has been recruited and the cellular context9. Ultimately the final decision about a cell’s fate must take into account the ratio of Trk to p75NTR receptors.

The neurotrophins are synthesized as precursor proteins, 240-260 amino acids long, which are further processed until they are secreted as mature homodimeric proteins into the extracellular space10. It was thought that the roles of the prodomain were to aid in the folding of the mature protein11 and to sort the mature neurotrophin into the various secretion pathways12. The proneurotrophin is cleaved to the mature neurotrophin by various proteases: plasmin, furin, MP7, PC1/3, PC2, PC5/6, PC7, PACE4, which cut behind a pair or even a single basic residue10.

A paper by Lee et al. (2001) revealed a new role for the proneurotrophins13. They found that proNGF and not mature NGF is the ligand preferred by p75NTR. Thus they postulated p75NTR-induced cellular processes would be more efficiently induced by proNGF than by mature NGF. Indeed, they found that cleavage resistant proNGF (mutated at the cleavage site to insure that it retains the prodomain) induced apoptosis ten times more effectively than mature NGF in a vascular smooth muscle cell line expressing p75NTR but not Trk receptors. The ability of proNGF to induce apoptosis was confirmed by work showing that proNGF induces p75NTR mediated death of oligodendrocytes following spinal cord injury14. However, proNGF can also mediate survival. Rattenholl et al. (2001) have shown that proNGF was as effective as NGF in inducing survival of DRG neurons11. Fahnestock et al. (2004) have shown that a mutated proNGF exhibits neurite outgrowth on both PC12 cells and mouse sympathetic cervical ganglions15.

Expression of proBDNF has been found in many regions of the rat central nervous system including spinal cord, substantia nigra, amygdala, hypothalamus, cerebellum, hippocampus and cortex19. In the human cortex, proNGF appears to be the predominant isoform and is elevated in Alzheimer’s disease20. In contrast, the level of proBDNF is decreased21.

Therefore, protease activity, controlling the balance between pro and mature neurotrophins becomes a major factor in the regulation of neurotrophin activity.

Several disease states, including stress and inflammation are known to affect the activity of proteases, and these also affect p75NTR expression and function22.

Thus, the neurotrophin story becomes even more complex. Not only the ratio of Trk receptors to p75NTR affects the cellular outcome, but also the ratio of mature to pro neurotrophin, controlled by protease activity.

Not all cells which express significant levels of p75NTR undergo apoptosis in response to proNGF, suggesting that additional proteins are required. A solution to this dilemma was proposed in 2004 when sortilin was found to be a receptor for proneurotrophins but not mature neurotrophins23. Sortilin is a 95 kDa member of the Vps10p domain receptor family and is expressed in a variety of tissues, notably brain, spinal tissue and muscle. ProNGF binds to sortilin via its prodomain, and to p75NTR through residues in its mature domain. Thus a three membered complex between proNGF, sortilin and p75NTR is proposed as the signaling intermediate required for proNGF mediated apoptosis. proBDNF also forms complexes with p75NTR and sortilin to elicit apoptosis in neurons24.

Although it has been more than forty years since the neurotrophins were first discovered, we are only now starting to appreciate the complexity of their true nature. These compounds lead a fascinating double life: as the proneurotrophin they bind to p75NTR and sortilin to set in motion diverse signaling pathways, which may lead to either apoptosis or cell survival, whereas in their incarnation as mature neurotrophins they bind to Trk and p75NTR receptors and insure cell survival. 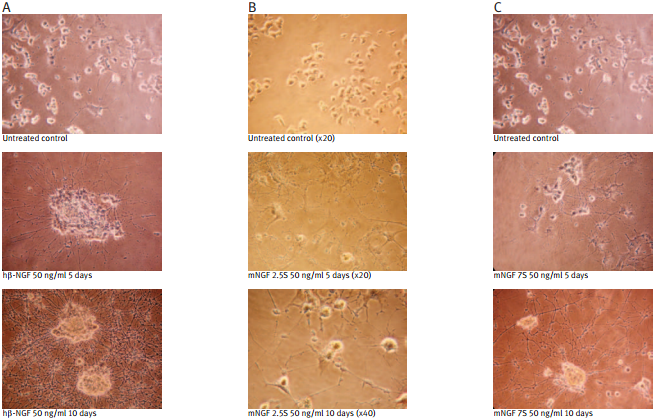 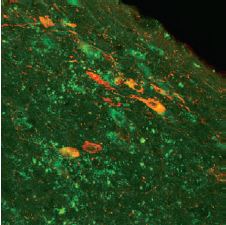 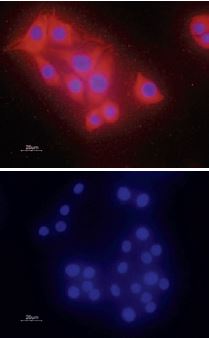 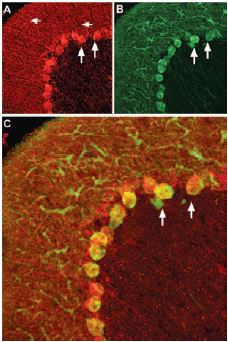 proBDNF Expression in Rat CerebellumStaining of pro-brain derived neurotrophic factor (proBDNF) with Anti-proBDNF Antibody (#ANT-006) in rat cerebellum. Pro-BDNF (red) appears in Purkinje cell bodies (vertical arrows) and in astrocytic processes (horizontal arrows in A) but not in Purkinje neuronal dendrites stained for calbindin D28k (green, in B) in the same brain section. C, confocal merge of proBDNF and CBD28K demonstrates the restriction of proBDNF to Purkinje cell body. 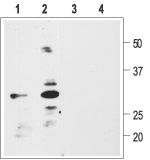 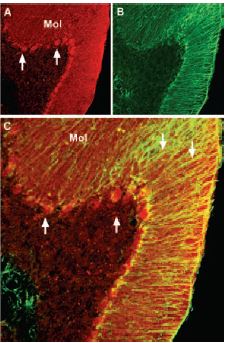 BDNF Expression in Mouse CerebellumImmunohistochemical staining of brain derived neurotrophic factor (BDNF) with Anti-BDNF Antibody (#ANT-010) in mouse cerebellum. A) BDNF (red) appears in Purkinje cells (upward pointing arrows) and is distributed diffusely in the molecular layer (Mol) including in astrocytic fibers (downward pointing arrows). B) staining of astrocytic fibers with glial fibrillary acidic protein (green) in the same section demonstrates the distribution of BDNF to neuronal as well as to astrocytic cellular components. C) Confocal merge of BDNF and GFAP. 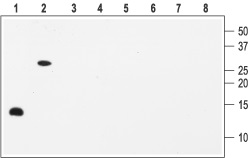 Expression of p75NTR in Rat BrainStaining of p75NTR with Anti-p75 NGF Receptor (extracellular) Antibody (#ANT-007) in rat brain. In A, cells in the nucleus basalis magnocellularis are stained positive for p75NTR. In B, staining of the same section shown in A, with goat anti-cholineacetyl-transferase (ChAT) confirms that p75NTR staining was specific to cholinergic neurons. 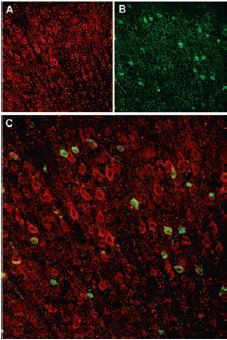