A wide variety of K+ currents recorded in neurons can be distinguished according to their functional and pharmacological properties. The identification of the channel family and subunits necessitates specific modulators and antibodies. Alomone Labs’ contribution to the advances made in K+ channels studies is quite broad. In this review, we summarize how same products have influenced advances made regarding the understanding of neuronal K+ channels.

K+ channels are tetrameric integral membrane proteins that form aqueous pores through which K+ can flow, and are found in many organisms1. In neurons, K+ channels are involved in maintaining the resting potential, repolarizing the membrane after action potentials, and controlling the timing of repetitive firing2.

One of the most useful reagents for investigating K+ channels is α-Dendrotoxin (#D-350), which specifically blocks KV1.1 and KV1.2 channels. Currents from mouse trigeminal ganglion neurons were divided into 3 classes, based on their firing properties. The sensitivity of the currents from each type of neuron to α-Dendrotoxin and Heteropodatoxin-2 (#STH-340) (Figures 1A, 1B) made classification of the type of channel involved possible and enabled a mathematical model of the current to be built3. 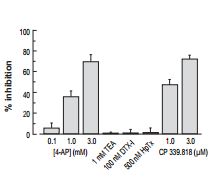 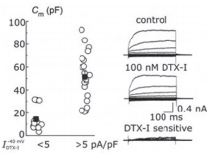 The loss of striatal dopamine in Parkinson’s disease model triggers a cell-type-specific reduction in the density of dendritic spines in D2 receptor-expressing striatopallidal medium spiny neurons. KV1.2 channels regulate somatic, but not dendritic, excitability in in these neurons as shown by their sensitivity to α-Dendrotoxin (Figure 2)4.

Figure 2. KV1.2 Channels Regulate Somatic, but not Dendritic, Excitability in MSNs.A) and B) Line scans taken 45– 60 µm from the soma show that blockade of KV1.2 channels with α-Dendrotoxin (#D-350) (0.5 µM) does not affect the amplitude of the bAP-evoked Ca2+ transient in dendrites (left traces in A and B) or adjacent spines (right traces in A and B) of either D1 or D2 MSNs (control: black, α-Dendrotoxin: red n = 5 each). C) and D) Somatic voltage recordings from the MSNs shown in A) and B) demonstrate that spiking is enhanced by α-Dendrotoxin in both D1 and D2 MSNs (control: black, α-Dendrotoxin: red). Recordings were generated by injecting sequential depolarizing current steps at amplitudes just before and after rheobase potentials (100 and 125 pA, lower black line).Adapted from reference 4 with permission of The Society for Neuroscience.

Degeneration of retinal ganglion cells (RGCs) is a major cause of visual impairment in optic neuropathies5. The use of optic nerve transection which leads to the apoptotic death observed in these central nervous neurons has become an important tool to test potential neuroprotective approaches in vivo. It is well established that in some cellular systems, an increase in K+ currents, depletion of cytoplasmic K+ and cell shrinkage all lead to the activation of proteins involved in apoptosis and concomitantly to apoptosis itself. The link between these two events is still largely unknown. By inducing RGC degeneration by optic nerve transection, Koeberle et al. quite elegantly analyzed the involvement of various K+ channels in apoptosis in RGCs following axotomy using channel blockers and siRNA knockdown of each channel in vivo. In the retina from a healthy adult rat, KV1.1 immunoreactivity was widespread using Anti-KV1.1 (KCNA1) Antibody (#APC-009) (Figure 3Ai). In the ganglion cell layer (GCL), KV1.1 was clearly localized with Fluorogold-labeled RGC somata (Figure 3Aii-iv). Five days following the axotomy, both KV1.1-specific siRNAs reduced KV1.1 immunostaining in the Fluorogold-labeled RGCs (Figure 3Av and vi). RGC survival after axotomy was increased when either siRNA targeted against KV1.1 was used. These results along with similar ones for KV1.3 strongly suggest that both channels in RGCs contribute to their degeneration after axotomy. 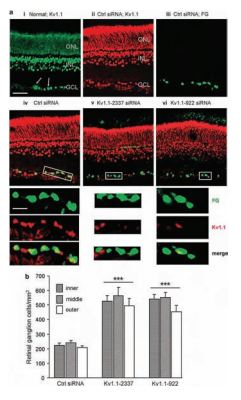 Figure 3. Expression Pattern of the Shaker-Family KV1.1 Channel and Neuroprotection Following siRNA-Mediated KV1.1 Depletion from Retinal Ganglion Cells (RGCs).A) KV1.1 immunoreactivity in the retina. Representative micrographs of transverse sections taken at the inner eccentricity and labeled with Anti-KV1.1 (KCNA1) Antibody (#APC-009) and secondary antibody, conjugated to either Alexa 488 (green) or Cy3 (red). When used, Fluorogold (false colored green) was retrograde transported to the somata RGCs by applying it to the freshly cut optic nerve stump. Scale bar, 50 µM in all main panels. i) In the normal retina, KV1.1 immunoreactivity (green) is seen in the inner nuclear layer (INL); outer nuclear layer (ONL); and ganglion cell layer (GCL). Both RGCs and displaced amacrine cells were labeled with KV1.1 antibody (arrows show examples). ii-iv) Control firefly luciferase-specific siRNA had no effect. Five days after Fluorogold (green), the control siRNA was applied to the freshly cut nerve stump, the KV1.1 (red) staining pattern was similar to the naive retina, and most Fluorogold-labeled RGCs also stained KV1.1 (yellow in merged image). Below the remaining micrographs, the boxed areas in the main images are color separated and shown at a higher magnification (scale bar, 20 µM applies to all expanded images). v and vi) KV1.1-specific siRNAs deplete KV1.1 in RGCs. Five days after axotomy and administration of Fluorogold and either of two siRNAs against KV1.1, the channel staining (red) in RGCs decreased. B) KV1.1 depletion reduces the death of RGCs. Summary of RGC densities in the inner, middle and outer eccentricities at 14 days after axotomy (***P < 0.001).Adapted from reference 5 with permission of Nature Publishing Group.

Ca2+-activated K+ channels are present in most neurons where they mediate the post-action potential after hyperpolarization,thereby modulating the frequency of action potential discharge. Recent in vitro experiments have confirmed that small conductance Ca2+–activated K+ (SK) channels, which mediate the medium after hyperpolarization, are present at excitatory synapses on principal neurons in the lateral amygdala. The fact that the actions of isoprenaline on excitatory transmission were blocked by pretreatment with Apamin (#STA-200) shows that in the lateral amygdala, the effects of isoprenaline on synaptic transmission are mediated entirely by the modulation of SK channels (Figure 4)6. These novel findings demonstrate that β-adrenoceptors control synaptic transmission and plasticity through the regulation of SK channel trafficking. This suggests that modulation of synaptic SK channels may be a mechanism that underlies adrenoceptor-mediated potentiation of emotional memories. 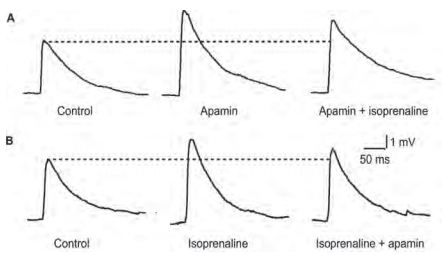 Paranodal axoglial junctions are essential for the segregation of myelinated axons into distinct domains and efficient conduction of action potentials. It has been shown that netrin-1 and deleted in colorectal cancer (DCC) are enriched at the paranode in CNS myelin. The paranodal axoglial apparatus has been described to act as a barrier, preventing the diffusion of K+ channels from the juxtaparanode into the paranode. A pan Na+ channel antibody and Anti-KV1.2 (KCNA2) Antibody (#APC-010) were used to investigate the domain organization in wild type and mutant cultures. In wild-type cultures, a clear gap was visible between nodal Na+ channel and juxtaparanodal KV1.2 immunoreactivity. However, in netrin-1-/- and DCC-/- cultures, KV1.2 immunoreactivity was often inappropriately localized to the paranode and the mean distance between Na+ channel and KV1.2 immunoreactivity was reduced in netrin-1-/- and DCC-/- cultures relative to wild-type cultures (Figure 5)7.

Figure 5. Disruption of the Domain Organization of the Node of Ranvier in Long-Term Netrin-1 and DCC-Deficient Slice Cultures.Long-term cerebellar slice cultures were double-labeled with antibodies against Na+ channels and KV1.2 using Anti-KV1.2 (KCNA2) Antibody (#APC-010) (A–D). KV1.2 protein was visualized using Alexa 488-conjugated secondary antibodies (green), and Na+ channel proteins were visualized using Alexa 546-conjugated secondary antibodies (red). In cultures lacking netrin-1 (C) or DCC (D), a reduced distance between Na+  channels (localized within the node of Ranvier) and K+ channels (normally localized to the juxtaparanodal region) was detected. This decrease was primarily attributable to the apparent “leaking” of K+ channels into the paranode, and occasionally the node itself (C, and D arrowheads). In netrin-1-/-, but not DCC-/- slices, the length of the Na+ channel positive domain was increased relative to control (C, arrow). Magnification: x100 objective; digital zoom, x4. Scale bar, 2µm.Adapted from reference 7 with permission of The Society for Neuroscience.

The identity of the K+ channels present in neurons of medial nucleus of the trapezoid body (MNTB) which serve in sound source localization was investigated. Using Anti-KV2.2 (KCNB2) Antibody (#APC-120), diffused KV2.2 immunostaining in the cytoplasm of principal MNTB neurons was observed. The most intense labeling was observed in processes either immediately adjacent to or near principal neuron somata (Figure 6)8. 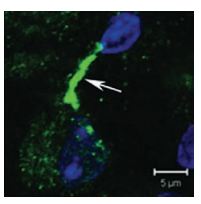 The neurons of the deep cerebellar nuclei (DCN) provide the last stage of cerebellar information processing by integrating an array of excitatory and inhibitory sensory motor input. To determine the distribution of ion channel types in large diameter deep cerebellar nuclei cells of the cerebellum, Anti-KV3.1b (KCNC1) Antibody (#APC-014), Anti-KCNC3 (KV3.3) Antibody (#APC-102), Anti-KCNMA1 (KCa1.1) (1184-1200) Antibody (#APC-107), Anti-KCNN1 (KCa2.1, SK1) Antibody (#APC-039) and Anti-KCNN2 (KCa2.2, SK2) Antibody (#APC-028) were used. These images (Figure 7) show that KV3.1 and KV3.3 immunolabel primarily over somatic membranes and the proximal 50 µm of dendrites of large diameter cells. Labeling was detected as a diffuse signal in the cytoplasmic region but also as a membrane-associated label that delineated the membranes of the soma and proximal dendrites9.