The NMDA receptors are members of the glutamate receptor family of ion channels that also include the AMPA and Kainate receptors.

The NMDAR is unique among ligand-gated ion channels in that it requires the simultaneous binding of two obligatory agonists: glycine and glutamate that bind to the NMDAR1 and NMDAR2 binding sites respectively. Another unique characteristic of the NMDA receptors is their dependence on membrane potential. At resting membrane potentials the channels are blocked by extracellular Mg2+. Neuronal depolarization relieves the Mg2+ blockage and allows ion influx into the cells. NMDA receptors are strongly selective for Ca2+ influx differing from the other glutamate receptor ion channels that are non-selective cation channels.

Ca2+ entry through the NMDAR regulates numerous downstream signaling pathways including long term potentiation (a molecular model of memory) and synaptic plasticity that may underlie learning. In addition, the NMDA receptors have been implicated in a variety of neurological disorders including epilepsy, ischemic brain damage, Parkinson’s and Alzheimer’s disease.

NMDA receptors expression and function are modulated by a variety of factors including receptor trafficking to the synapses and internalization as well as phosphorylation and interaction with other intracellular proteins. 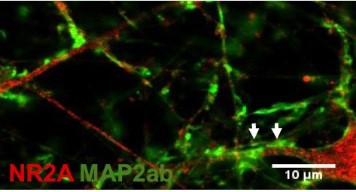 Anti-NMDAR2A (GluN2A) (extracellular) Antibody (#AGC-002) is a highly specific antibody directed against an epitope of the rat protein. The antibody can be used in western blot, immunoprecipitation, immunocytochemistry, and immunohistochemistry. The antibody recognizes an extracellular epitope and is thus ideal for detecting GluN2A in living cells. It has been designed to recognize GluN2A from rat, mouse, and human samples.