The contribution and importance of K+ channels to the normal activity of the heart is best exemplified by disturbances in the activity of one K+ channel, causing cardiac arrhythmia. This voltage dependent cardiac K+ channel is called hERG (KV11.1) and both mutations in the gene encoding this channel (KCNH2) and drugs that block the channel might cause arrhythmia and death. However, cardiomyocytes express several different K+ channels, all contributing to the electrical control of the cardiac muscle contraction-relaxation cycle. The repertoire of K+ channels in these cells is plastic and is changing under different physiological and pathological conditions. Below we review the use of Alomone Labs’ K+ channels antibodies and toxins in such aspects of cardiac research.

Heart beats result from nearly regular changes in intracellular Ca2+ in heart muscle cells (cardiomyocytes), with elevated Ca2+ causing muscle contraction. As in many other cellular processes, this transient Ca2+ elevation is initiated and maintained by depolarization of the cell membrane potential and is terminated by its repolarization back to resting values (in the form of an action potential waveform). Repolarization of the cardiomyocyte action potential is achieved by the delayed activation of potassium channels facilitating K+ efflux. The concerted activity of many different types of K+ channels (of which some 80 human genes are known to encode members of the four main families in this protein group), determines the precise timing and efficiency of cardiac repolarization1,2.

The use of specific antibodies serves as a tool to demonstrate the expression of ion channels in the heart, in different species and under diverse conditions. 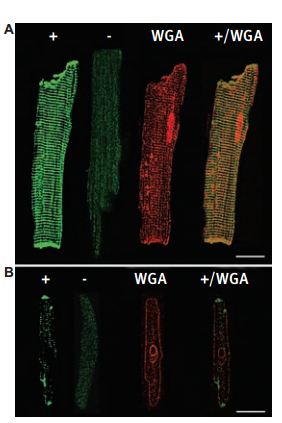 Figure 1. Immunocytochemical Detection of KCNK3 Channels in Rat Myocytes.Expression of KCNK3 (TASK-1) protein in rat myocytes. Immunofluorescence images from single ventricular (A ) and atrial (B) myocytes were stained with Anti-KCNK3 (TASK-1) Antibody (#APC-024) (+), eliminated by competitive inhibition with the antigenic peptide (-), and costained with wheat germ agglutinin (WGA). Colocalization of KCNK3 and WGA is indicated in yellow (+/WGA). Bar, 15 µm.Adapted from reference #3, with the kind permission of Dr. S.A. Jones of the University of Hull, UK and the Am. J. Physiol. Heart Circ. Physiol. 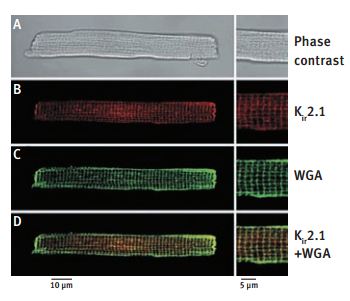 Figure 3. Western Blot Analysis of Kir3.1 in Tissue Samples Prepared from Different Regions of Rat, Ferret, and Guinea pig Heart.Western blot analysis of samples obtained from rat, ferret, and guinea pig heart using Anti-GIRK1 (Kir3.1) Antibody (#APC-005). One or two major bands corresponding to molecular weights of ~50 and ~55 kD were detected in RA (Lanes 2, 5, and 7) and IR (Lanes 3, 5, and 8), but not LV (Lanes 1, 4, and 6), in which equal amounts of protein from different tissues were loaded. Two similar bands were detected in LV from rat when the amount of protein was increased (Lane 9). IR, intercaval region; LV, left ventricle; RA, right atrial appendage.Adapted from reference #7, with the kind permission the J. Histochem. Cytochem.

Many of these K+ channels are modulated by endocrine, metabolic, and neuronal factors that in turn affect cardiac parameters such as heart rate. Increasing activity of K+ channels (resulting from increased numbers of functional channels, changes in kinetics, or changes in the balance between the various channels) leads to shorter action potentials (which may facilitate faster heart rate, for example). On the other hand, reduced activity that supports K+ efflux leads to broader action potentials. 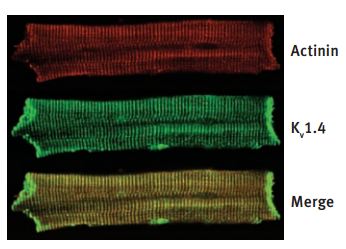 Figure 4. Immunocytochemical Detection of KV1.4 Channels in Dog Myocytes.cKV1.4 protein expression in Mid layer of normal and failing left ventricles. immunocytochemical stain of a representative Mid cell with Anti-KV1.4 Antibody (#APC-007) and α-actinin demonstrates colocalization of the proteins.Adapted from reference #25, with the kind permission of Dr. G. F. Tomaselli of Jones Hopkins University, USA and the Am. J. Physiol. Heart Circ. Physiol. 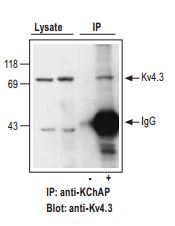 Figure 5. Coimmunoprecipitation of KChAP with KV4.3 Channels from Rat Heart.Adult rat heart lysates were incubated with (+) or without (-) KChAP antibody (1:100 dilution). Immunoprecipitates (IP) were collected on Dynabeads and presence of KV4.3 channels probed by Western blotting. Western blot with Anti-KV4.3 Antibody (#APC-017) (1:150). Lysate (40 µg protein loaded) and IP (- and + anti-KChAP) are shown.Adapted from reference #30, with the kind permission of Am. J. Physiol. Cell Physiol. 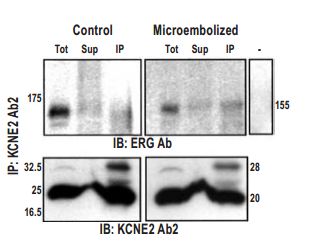